The Real Value of Small Steps 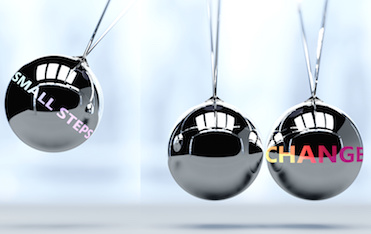 “A journey of a thousand miles begins with a single step.” The importance of taking small steps is well known. It’s the most likely advice you’ll get if you’re bogging down on something. “Try taking a small step.”

And yet, I have often found this advice unhelpful. I’m sure that is partly because I break down tasks into smaller steps all the time — almost automatically — so I don’t normally need to be reminded about this.

But when I have bogged down or gotten stuck — and did need some advice — smaller steps themselves rarely seemed to help.

For example, in the past I’ve tried to take a “smaller step” in writing and had it backfire. I recall one time I was having trouble getting my head around a chapter, so I decided to review some notes from previous days. Though this seemed like a very small step, somehow it was not a good next step, and my head was spinning after 15 minutes. I needed to take a nap to recover normal mental functioning after that allegedly “small step.”

Moreover, I’ve often found that small steps didn’t help me when the task was not motivating. When you resist doing some unpleasant task you think you “should” be doing, a small step is supposed to get you “over the hump” so you’ll do the unpleasant task. But I would see this as manipulative — which made me resist taking the small step!

In these kinds of cases, even if you carve out small steps, you wind up slogging forward, forcing yourself to pick up one foot after another. That is the kind of struggle and strain that I am opposed to on principle.

But on the other hand, there is something very important about taking small steps, and I think I finally understand the true reason why small steps can help you when work is bogging down — and why it didn’t help in those cases.

Small steps reinforce your freedom of choice — if you are only committing to the small step. Once you’ve taken it, you get to choose freely again whether you will continue or not. No harm, no foul if you don’t.

Here’s a simple example of what I mean. A male friend of mine doesn’t like to shave. But every day, when he confronts the choice to shave, and doesn’t want to, he asks himself if he’d be willing to just do a quick electric shave for 20 seconds so he doesn’t look unkempt. More than 99% of the time, he is willing to do that. Usually, at 20 seconds, he wants to spend a little more time finishing off his shave. But he knows he is free to stop, and perhaps 3% of the time, he does stop. In this way, he has a good shave almost every day, without ever forcing himself to do something he doesn’t want to do. Even though he doesn’t like shaving.

Here’s a more complicated example. I mentioned I had had some problems with writer’s block recently. I had deep resistance to writing newsletters. I dealt with it by giving myself total freedom of choice.

I realized that I couldn’t diagnose the problem unless I tried to write an article. I had 10 possible article topics, all of which I felt blocked on. I decided to pick one and start working on it, to help me understand the obstacle.

Over two days, I spent 4 1/2 hours of concentrated time working on that article. Every time I felt strain, I switched from my writing notebook to my journal. And after figuring out the immediate problem, I didn’t want to go back to writing. So, I promised myself, again, that I was just doing this to understand the block. I did not have to finish the article.

With this method, I was able to work steadily, willingly, on something I was willing to do (figure out the source of the block) without doing what I was not willing to do (write the article). I did figure out the source of the block, and the next day I wrote an article on a completely different topic using what I’d learned. (I never did finish that test article, and probably never will.)

Small steps like these are the means of helping you retain your sense of ownership and control of the task when it is not going well. They permit you to choose freely to challenge conflict as you go, rather than force yourself through the conflict.

As a result, you can use small steps to do unpleasant tasks without feeling like you’re making yourself do them — and without manipulating yourself.

A small step in a good direction — with no commitment beyond it — can help you out of inertia. A small step loaded with good intentions for the future will not.

This is a deep change in perspective for me. For years, I have been looking for some method that will guarantee I follow through in the future on an intention I set now. But that is on a mistaken premise. That is taking habit as the model for action.

It is true that when an activity becomes highly automatized (habitual), you need only initiate the first step, and the later steps follow unthinkingly. This is how you can shower and dress in 11 minutes flat, or deal cards while carrying on a conversation, or mow the grass with the same route every time.

But most productive activities (such as writing) require significant volitional control. You cannot succeed on autopilot.

And when you acknowledge that — when you allow that you can stop shaving, or stop writing, or stop exercising should you so choose — you eliminate all of the artificial conflict created by “duties” and “shoulds” and “musts.” You replace them with a sense of freedom and control over your own actions.

That — the reaffirmation of your own agency — is the motivational value of small steps.