The Power of a Virtuous Cycle to Motivate Long-Term Goals 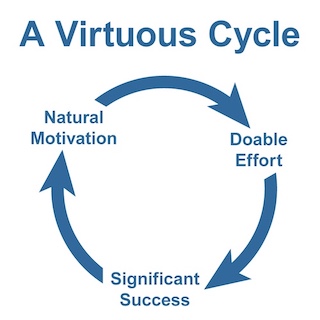 To achieve a long-term goal, you will need to put in effort across weeks, months, and even years. That requires motivation for the long haul. If your motivation flags, you need to get strategic. You need to create a virtuous cycle of effort so that you are naturally motivated to put in the necessary work.

You may have seen a virtuous cycle develop spontaneously in some area of your life. A little bit of effort paid off, gave you some deep satisfaction, so you were motivated to put in more effort. For example, my recent story of how piercing my ears led to many other positives is an example of a virtuous cycle arising spontaneously. When a virtuous cycle forms, the price/performance ratio of the work gets better and better. Either the task gets easier as you move forward, or it gets more rewarding, or sometimes both. The effect is that you are motivated to keep doing the work.

If you want to create a virtuous cycle when your motivation is intermittent, you need to take three actions consistently:

A Purpose with a Payoff

Before you take any step, you need to know why you are taking it. Your "why" could be to gain a value or to avoid a threat. Either can motivate action. However, if that value or threat is a long way off, you won't be particularly motivated to act now. You will not feel any urgency unless you see short-term consequences. This is just the way the motivational system works. When you have a long-term goal, you need to add urgency to the short-term tasks.

One way to add short-term urgency is to apply pressure. You create the pressure by identifying the dire things that will happen if you don't act now. People often misuse moral principles to lambast themselves with negative consequences, such as, “If I don't do this, then I'm a hypocrite."

I don't recommend this approach. The pressure reduces your crow space and makes the task unpleasant. This makes you less likely to want to do it another time. In other words, using pressure to take steps now on a long-term goal makes it harder to achieve the goal. You have seen this yourself if you have burned out from pressure.

The better alternative is to identify a meaningful value that is gained by the short-term action — a payoff.

For example, one of the participants in a recent Launch found herself unmotivated to go to the gym. In her mind, the reason to go was "she had to" in order to lose weight and get healthy. But those benefits were long range. You don't see the results instantly. I suspected she didn't like her exercise routine, but when she examined the issue more closely, she realized that she enjoyed her exercise routine and felt energized afterwards.

Her exercise routine had a short-term payoff, but she hadn't focused on it. All she needed was a change in orientation. I suggested that she go to the gym not just for the long-term goals, but also to get that energy. As a result, she anticipated the payoff and consciously enjoyed it after her workout. Soon her natural motivation was much more positive.

This is accomplished by incorporating the anticipated payoff into your reason for taking the action, i.e., making it an explicit part of your purpose so it can trigger a desire to take the action.

A Doable Step That Shows Progress

That Launcher's change in attitude helped her get started. But to really get a virtuous cycle going, you need to see results.

Successful action is the linchpin of a virtuous cycle. You can do all of the positive thinking in the world, but if you have not zeroed in on doable steps that you can accomplish, you will never make any progress toward your long-term goal.

This is why you often hear the venerable advice to "break the problem into steps" or "take a small step to get over the hump." This is good advice. Small steps are important. If you try to take a step that is too big, what happens? You fail. Does this make you more eager to take the next step? Not usually.

More to the point, small steps often gain big values. You develop experience and knowledge. You get clearer on what to do. The overall task feels easier and less daunting when you can see that the little steps are getting you there. In fact, you can often muddle through with small steps until you've entered into a virtuous cycle, without ever explicitly focusing on the payoff of each step or doing value-oriented debriefs.

However, small steps don't always show you that you are making progress. This can be true even if you are making progress. For example, that same Launcher had already figured out a good exercise and eating routine. She was convinced that it would succeed over time, and in fact it was succeeding. But it didn't feel like it. She got discouraged at one point because her progress seemed slow. In reality, she was consistently losing a pound a week, which is a good rate for taking off weight. But the scale doesn't move every day, and you need motivation on a daily basis.

She wanted to see her success, so she created a checklist of all the things that she needed to do on a daily basis. She was convinced that if she did all of them, she would reach her long-term goal. She added the extra pleasure of checking off each item as she finished it. This small routine, which you may have used yourself, adds a measure of objective success on your long-term goal to your doable steps.

A purpose with a payoff and a checklist to show daily success did the trick for her, and she marched through the next weeks of the program without a setback. But on any long-term goal, you are pretty much guaranteed to have a setback somewhere along the way, and you may not have coaching available to help you get on track. That's when you need your own value-oriented debrief.

A value-oriented debrief is a look back at what you were doing. You need to remind yourself what values you were after and figure out what you can learn from what happened. This value orientation is particularly important if you have a setback to make sure you don't become discouraged. When you fail, it's easy to get sucked into a vicious cycle instead of finding a constructive way forward.

A value-oriented debrief saved me when I had a setback working on this article. The 3-Point Plan I was using was:

This plan was intended to help me stay purposeful so I would write efficiently. However, as I fleshed out the details, I suddenly noticed that the ideas for the article were going in several directions. I panicked for a moment because I could see myself bogging down chasing those different leads. I have bogged down writing articles in this way many, many times. Indeed, this was my worst fear. I was actively trying to improve my writing process to avoid this exact problem. It looked like I was failing.

Now, I don't know if I've made this situation real to you. If you are not empathizing with me, remember a time you got up and tried, tried again — and then it looked like you were going to fall down all over again. That's the state I was in.

I hit the pause button and reviewed what I was doing with a value orientation. Why did I want to flesh out the details before making the 3-point outline? The answer was: I specifically wanted to activate a broader context of knowledge before making a final decision on the overall point and structure. Those other ideas were part of that context. This was progress, not regress — I needed the full context warmed up to make the decisions I needed to make. At this point I sighed in relief and finished fleshing out the ideas. I knew I would decide whether to include them or not in the 3-point outline in a second pass.

Incidentally, when writing future articles, I will make the middle step, "Flesh out the context" so I keep this value in mind. A clearer payoff built into my purpose would have avoided this setback.

The point is that a value-oriented debrief helped me see the values I was in fact gaining, even though things hadn't gone exactly the way I predicted. Even if you are truly on a wrong tangent, you can find value in it. After all, information about how not to gain a value is also a value.

Of the three elements, the value-oriented debrief is the one that is least close to common sense. It is what I most often need to coach people on in the Launch program. And it makes a huge difference.

With the combination of a value-laden purpose, a doable step that shows progress, and a value-oriented debrief when you have setbacks, you can easily set up a virtuous cycle. As you may infer given my previous article on how values form, you are doing three things to strengthen the values you are after:

Nothing guarantees immediate success. But setting up a virtuous cycle guarantees success over the long term.

Share this page
← Four Ways to Act in the Face of Conflict FAQ: Should You Fit Your Work into a Defined Time Block? →