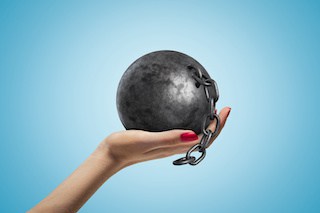 Guilt is the emotion that you feel when you believe you have failed to live up to your own moral standards. It is perhaps the most enervating emotion. It makes you want to curl up in a little ball to block it out and avoid it.

But that is the worst thing you can do.

Every emotion is an alert to a value at stake at this moment. Whatever emotion you are feeling, it is signalling that something important matters right now. Whether you gain and keep some value — or lose it or sabotage it — depends on your action in this moment. This is why it is so important to introspect your emotions. If you don't take the steps to understand them fully, you are acting with only hazy knowledge of what really matters to you. Your present and future happiness depends on your fully understanding the values that underlie your emotions.

The benefit of introspecting guilt is obvious in cases that Ayn Rand called "unearned guilt." These are cases in which, when you fully evaluate the circumstances, you realize that the problems you've identified were caused by your innocent error, not a guilty breach of morality. When you realize this, the guilt dissolves, and you are freed to pursue values again. You cut the ball and chain.

The hazards of introspecting earned guilt

The benefit of introspecting guilt is less obvious in cases where you have earned guilt. In these cases, you really did violate your principles. As you get clear on your culpability, you feel worse.

For example, I spoke with a client recently who felt terrible about having put on over 30 pounds last year — after having lost as much just before. As we explored what he was feeling and why, we uncovered a lot of self-criticism. Here's an artist's rendition of those criticisms:

I did it again. No one is putting that food in my mouth. I know what I need to do to lose weight. I was on a great diet and exercise program and then I blew it. I knew it was an issue with the pandemic. I can't keep riding this weight rollercoaster. I can't believe it's come to this. I know better. I've been through this cycle before and it impacts my health. I feel better when I'm on the right diet, so there's no excuse. I have the tools to deal with this, I'm just not using them.

If you simply gorge on self-criticism like this, you will make the problem worse. Every one of these statements could be true. The anger, guilt, despair, and frustration they trigger make you feel miserable. You will be more eager to eat a donut, not less.

Some people might say you need to experience this suffering as some kind of punishment for your sins. That is not my view. I learned from Ayn Rand that "the purpose of morality is to teach you, not to suffer and die, but to enjoy yourself and live." But how is that possible when it's painful to uncover the accurate criticisms that underlie earned guilt?

Respecting yourself when you're in a guilt loop

Revealing mistakes is a necessary first step in processing guilt. I talk about the steps for "forgiving" oneself in another article.

Unfortunately, a lot of people get stuck at this first step. Identifying mistakes is necessary, but it is not the place to dwell. I don't believe in wallowing in guilt.

The way that my client and the typical readers of this article would get stuck in a guilt loop would be through this cycle:

They would look at the pattern of problems, get mad at themselves, and make a new rule. "I'm just going to make myself do the right thing." They view themselves as the problem, and they start barking orders at themselves to shape up. This makes the self-criticism the primary motivation for their action. That is a type of motivation by fear. It is no wonder that they then set up a vicious cycle of yo-yo diets and burnout. They are holding themselves in contempt.

You are not the problem. You are the solution.

It is your effort that will make any change. It is your integrity that will guide it. It is your commitment to your own happiness that will eventually cause you to prevail. What is needed is a mental shift to see your values, your strengths, and your rational self-interest as your primary concern and your primary source of motivation. For many people, this is a huge mental shift.

I do know how to lose weight. The diet is not painful. I've learned a lot from experts, so I've figured out the diet that really works for me. Plus I've done it before and I know I can do it again. And my family gives me a lot of support.

Of course, I really love sugar! In fact, there is a relief to have a "cheat day." It gives me comfort from stress.

Thankfully, I'm still generally healthy. But when I'm on the diet I feel better. I am better at sports — I have more energy when I am on that diet.

I want to be the kind of person who takes care of himself. I can do this one day at a time. I want to be able to do it every day without so much effort.

This is giving contrary motivation a fair hearing. Some of these positives are strengths that he can use to diet. And some are legitimate issues he needs to address. For example, if he uses sugar to comfort himself when he feels stress, he needs a healthier way to deal with stress as part of his plan. And since he really loves sugar, likely he should put some sweets into his diet, so he doesn't feel deprived. This might mean testing out some of the low-carb desserts to see if any of them satisfy his sweet tooth. Or it might involve figuring out constructive boundaries he can put around sweets so he doesn't overindulge.

Treating yourself with respect instead of contempt helps to bring out your strengths, identify real concerns that need to be addressed, and figure out creative solutions. That's what makes the shift to constructive effort.

The rational rejection of a self-criticism loop

When accurate self-criticism feeds a vicious cycle of guilt, there is one more step you often need to take to break the cycle: you need to fully grasp the psychological impact of the self-criticism on your attempts to improve. A great tool for doing this is the "self-coaching model" by Brooke Castillo, which I wrote about in a previous article. Rather than re-explain it here, I'll just rely on it.

Self-critical statements are an important first step toward identifying your contribution to any problem you are investigating. But they are not valid means of motivating moral action. The end does not justify the means. The means need to be completely consistent with the end to be valid means.

When you see this clearly in your own life, in your own reactions, in your own attempts to compel your own development, using your own self-contemptful words, it's shocking. You realize that your efforts to improve yourself actually made the situation worse. At that moment, a large amount of guilt shifts to a deep sadness. You see for yourself that through a mistaken method, you have made your work harder.

At this moment you need to pause to mourn all that wasted effort and suffering from that mistake, and all of the goals it has held back. You need to let the sadness wash over you. This is a way of honoring your effort and your values. It recognizes that you really did care about the healthy diet. And you do. Look at all of the effort you put in grappling with the collateral damage of the self-critical approach.

This is the kind of emotional awakening that can start you on your final diet for permanent weight loss. Or start you leading people instead of bossing them around. Or start you achieving your goals instead of procrastinating your life away.

That is what breaks the ball and chain of guilt.

When you see that your choices created the motivational problems in the first place, you truly see that it was in your power to choose differently.

Long-term goals are achieved through a consistent orientation to values, a relentless commitment to achieving meaningful interim results, and a joyous celebration of progress along the way. This process is not easy. It is not immune from setbacks, disappointment, and even temporary despair. But when it is practiced as a principle, it is completely free of self-recriminations and the earned guilt that they foster.

Share this page
← Do You Want to Add Bright Spots to Your Day? How to Be Effective When You're a Bit Overcommitted: The 80:20 Rule →