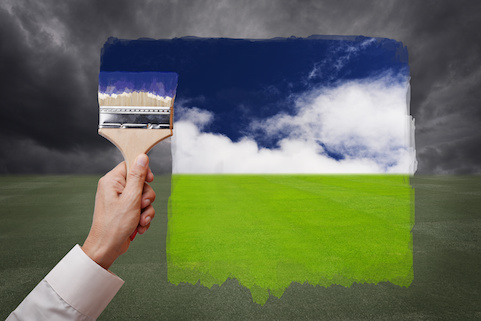 I’m reading my friend Alan Zimmerman’s book, The Payoff Principle, which explains the process he teaches for achieving “what you really, Really, REALLY want.” He is inspiring me on many levels, including convincing me to take a second look at some practices that have not worked for me in the past. One is affirmations.

Affirmations are positive, “can do” statements that you tell yourself. They are supposed to change your mindset, and some say that they help you to achieve your goals.

I have criticized “affirmations” in the past. In many cases, they are attempts to brainwash yourself. They are often justified by a vague “law of attraction” argument, which is that what you “put out into the universe” will come back to you. It’s easy to be skeptical of them. It’s no surprise that they’ve been satirized on sitcoms and late night TV.

I have used “affirmations” myself, but only as part of a very specific writing process I learned from Jerry Mundis. He recommended writing down the “can do” statement (“I can write easily and well”) followed by objections, then repeating that process in various ways 15 times. I found that Jerry’s exercise cleared out all of the negativity, doubts, and distractions that assailed me when I sat down to write, leaving me free to concentrate.

Alan has convinced me to try his unique approach to affirmations, which he claims helps you achieve your goals. He first has you identify 50 goals for life, across very specific categories. Then you turn the goals into statements that “affirm achievement.” These you repeat to yourself three times a day. You continue affirming the achievements until each goal is reached, which sometimes takes years.

If you’re interested in trying this process, I recommend you buy Alan’s book and learn it from him. It’s in Chapter 11.

What I want to share is why I’ve decided to try it. One factor is that Alan has tremendous credibility with me. He’s a person who walks his talk. He shared personal and customer testimonials showing people succeeding using his method. He pointed out specific failings of some of the other methods of affirmation that were clarifying. He thinks it’s a crucial piece of the overall success. Alan’s credibility got me to seriously consider it.

But his argument was not enough for me to try it. I never take advice like this unless I see for myself why I believe it should work. What is the causal factor here? After all, if I’m going to put in say 20 minutes a day doing these, that’s over 100 hours a year. That’s a serious commitment of time and energy. I need to be convinced it can work.

What was really unusual about Alan’s approach is that he argued you need 50 different affirmations, specifically designed to cover all areas of life. This stunned me when I read it. I’ve never seen anyone advocate having more than a handful of affirmations — or perhaps one in each major life area. In general, 50 goals seems totally overwhelming. My head explodes at the thought of tracking 50 goals. It would be impossible.

On the other hand, he is not arguing that you track 50 goals, just that you remind yourself of them 3 times a day.

And on the other, other hand, it is certainly true that I have 50 or so goals floating around my head. I’ve never found an effective way to prioritize that many goals, so the lesser goals are all achieved “catch as catch can.” I have always felt a bit of loss as I’ve accepted that a particular goal doesn’t fit on one of my prioritized lists.

Rather than pretending I have even more hands, I’ll just say and…

And, I’ve been thinking a lot about the need for a “top of mind” standard for decision making. In order to make a decision quickly, you need to be satisfied with the decision you can make based on a short (3-minute) warmup of top of mind issues. (Three minutes is a rule of thumb I use — it’s enough time to get the obvious issues into awareness.)

And, here Alan is giving me a method for making sure that all 50 of my top goals stay top of mind. This ensures that they will be factored into any decision I make.

And, one of the benefits I’ve seen from affirmations is that they give you “the words you need for the time when you will need them.” They help you hold the context when self-critical thoughts go through your mind.

The bottom line? I have decided to test drive Alan’s method of “affirming achievement” for three solid months, because I think this may be a way to keep all of my goals top of mind, without feeling overwhelmed by trying to track them all. At that time, I will make a conscious decision for whether to continue for a full year. By then, I believe I’ll know whether this is a practice for the rest of my life. My only concern going in is: will these goals use up critical “crow”1 space and make it harder to do concentrated work? I’ll find out.

My reason for sharing this is not to convince you to try affirmations, but to show you the kind of reasoning process I use to consider advice from other people with whom I respectfully disagree.

Though Alan and I share critically important values, we have very different philosophies. He’s religious, I’m not. I’m an egoist. I believe he would say he is an altruist. In his book, he makes quite a few statements that I disagree with. But rather than dismissing his comments, or jumping into an argument with him, I take the time to identify the facts he is looking at. What is he seeing? What is a plausible explanation for his conclusion? Is there a context in which it make sense to me?

Then, and only then, do I ask myself to form my own conclusion about those same facts. Using this method, I’ve learned a lot from Alan, and from a lot of other  people with a diverse range of views. You can, too.

1. “Crow” Space is the capacity of focal awareness. Read more about it in my article What is “Crow” Overload?