The Missing Step That Keeps You Flailing 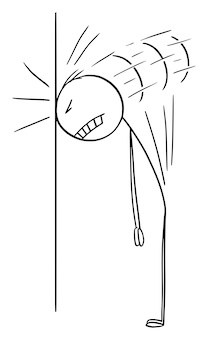 Flailing is my word for a particular pattern of unproductive effort: you try, and try, and try — harder, and harder, and harder — and you still don’t achieve your goal. Some people call this hitting your head against the wall. It sure feels like it when you’re flailing: a headache and intense frustration are the signature symptoms.

When you are flailing, there is something wrong in your approach. An old saying defines insanity as “doing the same thing over and over and expecting a different result.” That’s what you’re doing when you flail, and that’s why the basic solution is to find a different approach to achieving your goal.

You can only figure out if you’re flailing by going to the meta-level and noticing a pattern.

For example, I once worked with a client who would plan to work on an important project at a certain time, but frequently something would happen that prevented his working on it. The problems were almost always family-related. Either a child would have an emergency or his wife would need him to watch the children.

Is this flailing? Not the first time. Not the second time. Maybe not even the third time if it only happens on occasion.

This situation becomes flailing when you realize that when you make this particular kind of plan, it always fails or usually fails. At first, you will notice this only in hindsight. When the problem occurs, your stomach grips and a little voice says, “It’s happening again.”

That is a red alert. If you are flailing, do not pass go, do not collect $200. Go straight to high-level problem-solving for finding a different approach. If you don’t make a big intervention, you will repeat this mistake again.

Why it’s not so easy to stop flailing

It takes a special effort to stop flailing for a simple reason. These situations recur because every step leading up to “it’s happening again” seems perfectly reasonable. It’s so reasonable that you followed almost the identical path before. Where is the mistake? There is no obvious mistake — or you would have noticed it and corrected it after one of your previous failures.

There are many reasons why you might keep trying the same approach, but the most common one is that you think you just need to try harder.

For example, maybe you have taken a course that gave you a step-by-step process that is supposed to ensure success. You try to follow the steps but there are always problems. When it fails, you blame yourself instead of the process. You decide to double down on your effort.

Even if you know about this pitfall, it’s easy to fall into it. Recently I spent a year trying to implement Brooke Castillo’s time-management system. It seemed like I just wasn’t doing it right. It was failure after failure until I finally threw it out the window in a fit of exasperation. Why did I stick with it so long? First, the promise was inspiring and compelling. As presented, it sounded like an ideal that would help me resolve all of the conflicts I had between creative work and business management. Second, I did learn a lot from the attempts so it seemed like I was making progress. But in the end, it was not the right system for me. It did not have enough support and flexibility for hard-core creative thinking of the kind I do.  And in hindsight, I could have figured that out six months earlier.

It’s good to remember that there are no one-size-fits-all solutions for really difficult problems. This doesn’t mean you can’t learn a lot from other people’s systems. But rarely will any particular system be exactly what you need.

Another reason you might keep pursuing a failed approach is that it seems like there is no way to plan. I suspect this was the problem for the father. He didn’t feel he could plan his time because at that point he was the primary caregiver for his children. So plans were just wishes. The problem was the belief that nothing could be done about it.

You need a different approach to achieve the goal

When you’re flailing, the solution is to find a different route to the goal.

In one sense, this is just a creative problem-solving process. There is always more than one way to achieve a goal. As I discussed in my recent article on creativity, you may need to challenge assumptions in order to find that alternative. When you’re flailing, you likely have some tunnel vision. You will need to question your process.

For example, the father whose projects get pre-empted by family issues may need to question the assumption that he can’t protect a block of time in advance. Maybe he needs to figure out a block of time that his wife could cover. Or maybe he needs to arrange for a babysitter and work in the library, so he is guaranteed uninterrupted time except in a bona fide emergency.

The second method I recommended in the article on creativity was to identify the deeper values involved in the goal and see if there is a way to achieve the deeper value. That too may be helpful and necessary. I finally had a big breakthrough on my scheduling process when I identified that what I wanted most was to have a positive attitude toward all of the work I did during the day. All kinds of problems and mistaken assumptions dissolved when I got clear on the deep reason I wanted to work on a schedule.

But there is one common-sense issue that is particular to flailing that can also help: look for a skipped step.

When you think you know the exact steps you should take to do something, they are probably in the ballpark. You probably are getting some intermittent success that makes you think you are on the right track. The father sometimes got some work done; I sometimes seemed to get my schedule more under control.

So, the process may be generally correct, but the task is not broken down finely enough into steps you can actually take successfully.

For example, you may lack the knowledge or skill to take them. This is often the case when you attempt a series of steps taught by someone else. For example, many courses on starting a business have as an early step “pick a niche.” Some people can do that in one step but most get hung up on it or pick it arbitrarily. The truth is that if you pick a niche that you don’t care enough about, you will not be motivated to do any of the work to create your business. So, yes, it’s a critical step in creating a successful business, and yes, it’s an early step, but it is also a step that may require much remedial work for some people.

With hindsight, this was part of my problem with the scheduling system I tried. It was too difficult to predict how long creative tasks would take — so my schedules were always off. I did recognize this difficulty early on, but instead of questioning the process, I doubled down on getting better at estimating how long certain creative work would take. Developing that skill turned out to be harder than the original problem.

Often, the reason you are skipping steps is that it seems like the goal is within your grasp. You feel like you could taste it if you just tried a little harder.

F.M. Alexander calls this kind of short-circuiting of a process “end gaining,” which is not a great term in my mind. What he means is that you are trying to go straight for the goal without using the means whereby the goal is accomplished. For example, if you try to persuade people to buy a product without establishing how it would help them, you are short-circuiting a necessary step.

It turns out that this is the problem in many typical cases of flailing. So, if you find yourself hitting your head against the wall on the same problem over and over again — pause. Take a moment to challenge your assumptions and clarify your goal. And see if that suggests a step you may be skipping.

Share this page
← Learn the Words for the Time You Will Need Them FAQ: How Do You Save Your Mental State? →