Stuck in a Pattern? Break Out with an Experiment 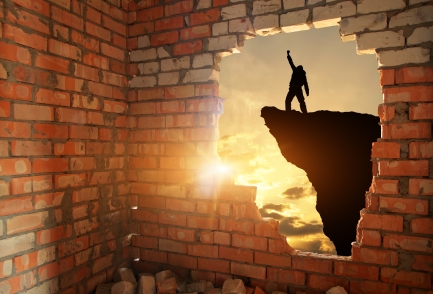 It's easy to fall into a counterproductive pattern. Perhaps you often check email before settling down to work--and then reading the email wipes out your morning work time. Or three days in a row you put off an important call until the afternoon--then forget to make it until it is too late to call.

Looking back in frustration, you might think that telling yourself sternly "don't do that again!" would suffice to break the pattern. But it won't. Our minds easily form grooves, and once you are in a groove, you need a little extra work to get out of it.

For example, consider a standard driving route you take--to work, or to the grocery store, or to wherever. As you approach an intersection, you automatically remember which lane you usually move to, and that becomes the natural next step. One event triggers the next. If you are going somewhere else, you have to be extra vigilant to make sure you don't take your usual turns.

A similar thing happens when you form a counterproductive work pattern, like checking email when you ought not to. Some plausible reason for initiating the action occurs to you, such as "it will only take a minute," or "I need to make sure nothing urgent has come up."

But then, a longer email-reading session unfolds from that first decision. Maybe one email has a link to something to read on the web--and that leads you to another, and another, until you've spent 15 minutes surfing online. Or you zip off a quick reply to one email, then get an instant response, which leads to a back and forth, which sends you off to look something up. You know how it goes. An hour later, you look back in regret at the lost time.

So, here's the problem. Tomorrow the same justification for reading your email (or putting off the call, or whatever it is) will occur to you at the same time--just like the need to change lanes occurs to you at the same intersection every day. Your previous choice reinforces this as your standard operating procedure.

When you notice that you're in an unproductive pattern, you need to prepare your mind so that you think of other options at that critical moment. You need to figure out three things in advance:

For example, you might decide the phrase "Checking email will only take a minute" is your signal that the pattern is starting. The alternative action might be, "Wait to check email for two hours." The argument for doing so might be, "If it can't wait two hours, I'd expect to have a voicemail about it."

You need all of this prepared, in advance, so that when you get to that intersection, and start moving into the left lane, the entire counterargument occurs to you.

Even so, you may be strongly tempted to fall into the same old pattern. The old argument may still sound plausible, because your counterargument doesn't have the force of habit behind it. But you'll at least have paused and noticed the intersection you're at.

When that happens, I suggest you cajole yourself out of the old way, by saying something like, "I'd like to experiment a little with another route this time, to see how that works out."

This is what a prepared counterargument gives you--a moment to pause, notice you're falling into a rut, and do something about it. It may seem wimpy to counter that force of habit with a desire for novelty, rather than rely on your argument, but that loses sight of the big picture. The important thing is to break the counterproductive pattern. Break it once, with a little experiment, and you will find it much easier to choose the most productive course next time.