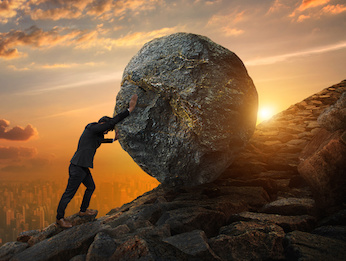 Perhaps the most important lesson I’ve learned in life is to treat struggle as an alarm that warrants your immediate, full attention. By “struggle,” I mean “to proceed with great difficulty and effort.” [Merriam-Webster] You struggle because the task is difficult enough that you don’t know how to do it. You try and fail. Failure saps your motivation (whereas success would have fed it). Keeping at the task takes more and more effort, as you drain your energy reserves.

Struggle indicates a problem that needs solving, urgently. Persevering with struggle is self-destructive.

This view is a total about face from my previous thinking. I used to view struggle almost as a badge of honor. I sought out problems to tackle that were extremely difficult. Hard problems were interesting, important problems. I considered struggle to be the price I paid for doing something worthwhile. When I started to struggle, I would just gird my loins and try harder. If I eventually broke through by sheer brute force effort, I felt validated. If I didn’t, I figured I hadn’t tried hard enough.

There is a sliver of truth in my old perspective. You struggle because you have come up against your own limits of knowledge, motivation, and energy.

The question is, how should you persevere? If you simply accept the struggle and try harder, you create a vicious cycle. That’s because struggle is painful and demoralizing. If you persevere, you associate the pain and suffering with pursuing your most ambitious goals. You program conflict into your value system. The goals that should motivate you to jump out of bed in the morning become burdened with fear and resistance.

It took me a bout with Epstein-Barr about 10 years ago to figure out that trying harder despite struggle is disastrous. I saw that my attempts to keep working despite the illness were contributing to the illness. Since then, I have monitored carefully for struggle, but it’s sometimes been quite puzzling to figure out another way forward that isn’t just “try harder” with more of the same effort. I’ve finally found the general approach to take, and I am delighted to shave some time off of your learning curve by sharing it with you.

If you are struggling, you have misconceptualized your choices. You are acting like something is under your control that isn’t. Look for some fact you need to accept that will then change the decision calculus, and show you what your real choices are.

For example, the omnipresent fact that is worth reminding yourself to accept on a daily basis is: there is not enough time in the day for you to do everything you might want to do. If you fight this fact, you will rarely be productive. You’ll identify what you want to do, assume you can do it all, pick one task to begin with, and plunge in. Somewhere along the line, time will run out or a crisis will occur, and it’s likely that something important will slip through the cracks.

This fact — that there is more that you might want to do than you could possibly do — is a fact about the world. The world is filled with values of all kinds. At work, everywhere you turn there is a way to make the product or service better, a way to help the team work together more effectively, or an idea for how to expand what you’re doing to reach new customers or to create new products. In your personal life, everywhere you turn, there is something interesting to learn, another terrific person to meet, or a new way to enjoy your free time.

When you deeply accept the fact that you can’t do everything you’d like to do, you also see another fact clearly: there is time to do what you consider most important, if you take total ownership of that and do what’s most important first.

Accepting that you can’t do everything, but you can do the most important thing first will change the way you identify your choices. Not only will you think more about what’s most important, you will get better at factoring in time. Instead of feeling like a victim of circumstances, you see you are in charge of your life.

This same focus on facts can change how you deal with interpersonal issues, too. For example, a client was struggling with a family issue. His sister had been diagnosed with breast cancer, but she didn’t want to talk about it with him. He was both hurt and upset about her diagnosis, but he didn’t see that he could address his emotional turmoil without talking with her.

Now, there is a grain of truth in this, in that it would probably be faster and easier to work through this in conversation with her. But of course, it is possible to work through any emotional issue oneself.

However, because he believed his only reasonable choice was to wait until she was ready to talk, the issue festered within him for a month, sapping his motivation and making him miserable.

The crucial fact he needed to accept was: he could not control his sister. His sister may never be ready to talk about the issue. He had no evidence that she would change her mind about talking with him any time soon. The choice he was actually facing was: Wait for his sister and maybe never address the emotional issues, or work on them himself, despite the fact that will take considerable time and effort. These were the two choices under his direct control. “Talk with sister” was not one of the choices he actually faced.

Framed this way, the choice became easy. He had already used considerable time and effort in the waiting game. Devoting that time and effort to working the issue out himself could only make things better and reduce his overall distress. That was a way forward, where success was under his control, instead of out of his control.

Accepting the facts helps you see what choices you really face. It helps you see what is in fact under your volitional control. This helps you then determine a step that actually moves you forward to success — instead of leaving you struggling and fighting to try to change an unpleasant fact of reality.

Share this page
← Brainstorming by Yourself vs. in a Group 3 Ways to Reveal Facts You Are Missing →