Sometimes Concentrated Thinking Is Not the Answer 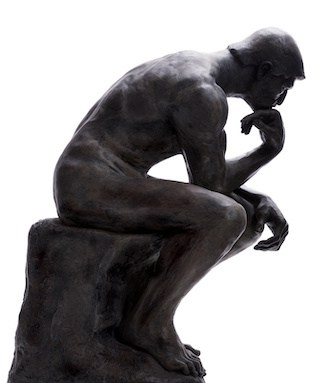 I like to quote Voltaire, who said, “No problem can withstand the assault of sustained thinking.” And true to that idea and my calling, whenever I have a problem, I think about it. A lot. In depth. Until I have a solution.

This is a virtue. It is my willingness to continue thinking and find my way around mental and existential obstacles that underlies my own personal growth. It is the thousands of hours spent thinking about very difficult questions that have given me a deep knowledge of psycho-epistemology.

But concentrated thinking is not always practical. For example, when I am very tired, I sometimes try going through the motions, but I soon see that I am getting nowhere. Or, when I try to concentrate after a meeting or giving a class, I am frequently distracted by new ideas occurring to me as a result of the interaction with other people. Or, when I am extremely concerned about a conflict with someone close to me, thoughts about the relationship will intrude on anything else I try to do. Sometimes those thoughts even intrude when I try to think about how to resolve it.

Logically, it makes sense to go to sleep when you’re tired and to schedule the intense thinking for early in the day before your subconscious can get too jazzed to let you concentrate.

But even though I knew this, I still would fall into the trap of unproductive thinking. A big issue would come up, and I would hit my head against a wall trying to think it through despite emotional overload, fatigue, distraction, and every other obstacle. Being some combination of stubborn and committed, I could persist at this for 2–3 days, during which time I would get nothing else done. In these cases, the issue succumbed to thought eventually, but only after much struggle and rarely thanks to the frontal attack.

In hindsight, I believed I needed to concentrate on those problems until they were solved. I took this as an out-of-context absolute. I believed concentrated thinking was the only path to resolving the problem, even though I couldn’t really concentrate at the moment given my mental state. I never considered an alternative. I just kept trying again and again, making only minimal progress in hours of effort.

Incidentally, this is what I call “flailing.”  Flailing is a pattern of unproductive effort in which you repeat the same failed action, again and again, even though it isn’t working. Why? Because you have tunnel vision regarding how to solve it, and you are desperate to do so. So you just try harder. And harder. Because you are sure you know what you should do. If you are a little crazy (as I was), you don’t stop until you succeed through sheer brute force effort or you create a crisis. (I would work until I literally made myself sick.) But most people get discouraged and give up after a burst of flailing.

Flailing is never an effective use of your time even when it’s successful. It sabotages your long-term motivation by turning goal pursuit into a willpower-sapping slog. The best antidote to flailing is to recognize that your goal pursuit shouldn’t be this difficult. You must be making a mistake somewhere. There is some contradiction in your assumptions about how to solve this problem. Or there is some fact of reality that you are overlooking.

Folks, this is sometimes the case. You do not have total control over your attention. Intense emotions, overwhelming fatigue, and constant distractions interfere with concentration. The lesson I learned the hard way is that if you literally cannot concentrate, you should not be trying to concentrate. I was setting an impossible goal and that, of course, set me up for failure. Instead of being goal-directed, I was in fact reactive as I became distracted again and again. Though I was trying to do concentrated thinking, I was actually out of focus.

Some of you are reading this and nodding your heads, because you also have tried to force yourself to think through an issue when you couldn’t concentrate and you know how unproductive it is. Others of you are mystified that anyone would drop everything for 2–3 days to try to think about a problem. But I bet all of you have flailed on a task sometime. You flail when you are sure you know what you should do, and you just keep trying it, again and again, despite abysmal failure. Maybe you keep having the same unproductive conversation with your spouse. Maybe you keep trying to solve a particular problem by buying new hardware and, although you have a garage full of discarded equipment, the problem is not solved.

If you catch yourself flailing, you always need to check your premises. You are skipping steps in some way. Your conception of how to solve the problem is mistaken. You are contributing to the problem in some way that you are overlooking.

In my case, I did not appreciate I should prioritize meeting my mental needs over solving the problem.

If you cannot think, then something is wrong and you will have feelings about that. You will be mentally overloaded, or emotionally triggered, or exhausted.  But this is a temporary incapacity if you are willing to take the mental obstacle seriously and meet your mental needs.

When you are mentally overloaded or exhausted, your mental need is obvious. You need crow space or mental rest. This is an absolute.

When you are emotionally triggered, you need to process those emotions rather than suppress them. By this I mean that you identify the underlying values giving rise to them. Processing your emotions is the best way to find out what you’ve been missing. Contradictory emotions are leads to contradictory premises, hidden assumptions, and overlooked needs.

This kind of value-based emotional processing takes skill, but it’s a learnable skill. When you process your emotions properly, you have a mental experience that is similar to the feeling you get when you make a list and suddenly your next step is obvious. Your mind clears, you see your options before you, and a desire with a commitment to act wells up inside you.

Sometimes you can only do this emotional processing a little at a time. Then the key is to stay emotionally present and open to the emotions as they come up without wallowing in them. I read once about a woman whose daughter went missing. During the hours of the police search (thankfully successful), she stood at her ironing board and ironed. This is how she stayed mentally present, goal-directed and in focus rather than reactive in a very emotional situation. She gave herself a menial task that she could do with her present mental resources, which would permit her to process the emotions as they came up without being thrown off.