Next Step vs. Next Goal 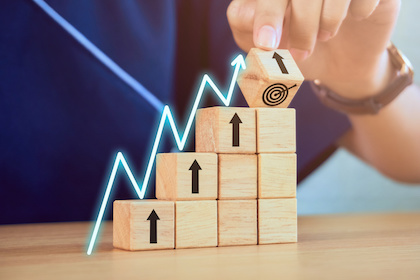 First, let's talk about steps. If you were trying to organize a 30-person meeting, you might have many small steps:

By focusing on one step at a time, you could accomplish the project easily.

When you break a project into steps, you need to make the steps small, and do them in the right order. The right order matters: you can't get contact info for attendees before you make the list of attendees. And you can't send the announcement until you've done both of those.

Small steps matter, too. Often we try to do two steps at once — to draft the agenda and draft the announcement in one step. When the task is simple, that may not be a problem. But if it becomes confusing, you need to break it into two separate steps, each of which is easy.

In short, "break the problem into steps" is well-understood problem-solving advice. You want to be able to focus on the next step, and have it be clear and doable.

However, simply breaking a problem into little steps doesn't give you enough leverage on a complex, long-term project. For example, suppose you have a goal to start a new business. There are thousands of steps involved. You can keep identifying little doable steps, indefinitely, without ever selling anything. But if you're not selling anything you do not create a business, no matter how busy your steps make you.

In such a case, you need to know the next goal, not just the next step. The next goal is a scaled-down version of your vision. It is a goal that you can see your way to — not so far away that it seems like it will take forever. And it is a true goal, in the sense that you will have accomplished something tangible and beneficial once you've reached it.

There are many ways to scale down a long-term, visionary goal to one that can be accomplished relatively soon. In the case of starting a business, you can make a prototype and try to sell it. If the product is cupcakes, you could start by selling them at a farmer's market. If the product is a new gadget, you could create an advertisement on the web and take preorders. Scaling down a business means: proof of sale. Sell a version of the product to someone.

P.S. I teach a general method for this in the Thinking Lab. I call it "Planned Evolution."

Share this page
← The Roles of Thinking, Observing, and Learning in Gaining Knowledge How an “Urge Jar” Can Help You Follow Through on Your Intentions →