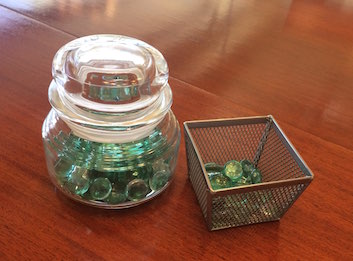 While doing a competitive analysis to build my business, I checked out the Self-Coaching Scholars program created by Brooke Castillo. It looked interesting, so I joined and have been educating myself in her methods. One of the new tools I’ve adopted is the use of the “Urge Jar.”

An Urge Jar is a covered glass jar that holds 100 colored beads. The beads are either in the jar or out of the jar in a bag or bin. When you withstand an urge to do something that runs counter to your conscious conclusion about what to do, you put a bead into the jar. When you fill up the jar, you pat yourself on the back, dump the beads out, and start awarding yourself beads all over again.

Whether you are fighting off distractions, breaking a habit, or acting against some old premise that makes your life miserable, an Urge Jar is a surprisingly effective tool for reinforcing your best intentions. This is Brooke Castillo’s method, but as usual when I share someone else’s tool, the explanation and validation are mine.

The deceptively simple part of using the Urge Jar is knowing what’s best for you. You need to be convinced that the urge is not in your interest. It’s not enough to feel the urge and think “I shouldn’t.”

For example, my official practice is to stop eating by about 8:00 p.m. Yet, I often have an urge to eat something sweet at 10:00 p.m. When I get that urge, I need to remember not just the bare conclusion, “I shouldn’t,” but why I don’t want to eat after 8:00 p.m. My primary reason is that eating late interferes with my sleep. My secondary reason is that fasting for 14-18 hours increases my concentration the next morning. Sleep and concentration are two important values of mine.

If I bring these facts into awareness, I see the urge for what it is — an out of context desire. I made the commitment to stop eating at 8:00 p.m., knowing I might be hungry after that time. I consciously concluded that I am willing to tolerate feeling a little hungry (a mild unpleasantness) to gain the benefits of a 14-18 hour fast.

Unfortunately, knowing that intention may not quell the sudden urge for cookies. Or pie. Or cake. In such a situation, “Just say NO!” is not a particularly practical tactic. It usually just injects intensity into the urge. COOKIES! PIE! CAKE! An Urge Jar is much more practical.

At that moment, I go to my Urge Jar and set the timer that sits with it for 10 minutes. I remind myself that this is just an urge, and I can handle some unpleasantness for 10 minutes. Then I go about my business.

Any emotion has a time course. If you can distract yourself for a few minutes, it will usually fade, unless something specific is reinforcing it. Indeed, I am often surprised when the timer rings. I had forgotten about the urge. But having been reminded, I put a bead into the jar to celebrate one more small life-serving decision made and acted upon.

90% of the time, this small symbolic process “gets me over the hump.” If I had been resisting a task, it gets me involved in the important task. If I had been tempted by a distraction, it gets me focused on what matters most, instead. The urge is fully recognized as an out-of-context feeling that is not relevant or important.

Sometimes, when the urge is pulling me off something important, I find that some new urge hits before the 10 minutes are up. I haven’t really solved the problem. In this case, the Urge Jar helps me escalate my response.

For example, this morning I had some trouble settling into writing this article. I had made 15 phone calls this morning for a volunteer organization that I belong to. Normally I try to avoid talking with anyone before writing, because conversations stir up ideas that distract me. Sure enough, at the time I had scheduled to start writing, I was pulled to follow up on other items of business related to those calls.

At a certain point, I reminded myself that I needed to start writing, and that unlike the calls, the remaining items of business were not that time sensitive. I decided to use the Urge Jar to help reinforce my decision. I set a timer for 10 minutes, but I didn’t get over the hump.

About 5 minutes later, I started worrying about whether I had paid a bill that was due today. I chose to stop writing to verify I had indeed paid the bill already, but I didn’t award myself a bead in the jar. Instead, I set the timer afresh for 10 minutes, with the new self-awareness that I was having trouble getting mentally involved in the writing process. Instead of “just trying,” to concentrate, I switched to using a writing tactic that helps to warm up the context and make writing easier. That finally pulled me into the work, so that I eventually earned my bead.

What do you do if you have total failure? 5 minutes after setting your timer, you are off eating a cookie. Or before you set the timer, you resist using the Urge Jar itself?

I view this as a red alert. What you’re feeling is not just an urge. You are feeling driven to do something that is not what you thought was in your best interest. That drive is coming from somewhere. Your emotional system is predicting a horrible experience if you take the action you really think is in your best interest. Is that an accurate prediction? Or is some old habit or mistaken premise distorting your predictions? You don’t know unless you investigate further.

You need more powerful tools to figure out what is in your best interest right now, and act decisively on that judgment without resorting to forcing yourself. (I teach such tools in Do What Matters Most.) The difficulties using the Urge Jar are a signal to escalate your response.

Some people think the use of the Urge Jar creates a “conditioned response,” that getting the bead is a “reward,” like a rat getting a food pellet for performing properly. But that is not what is going on here.

Using an Urge Jar helps you become more self-aware of your conscious intentions, your contradictory feelings, and your opportunities to make life-serving choices. It gives you a visual symbol that your mind, not your urges, are in control of your life. And it reframes urges as trivial obstacles, helping to put you in the right mental set for acting on your conscious conclusions, despite an uncomfortable urge to do something else. It helps you hold the full context so you can make a rational judgment about your next action, drawing from the best within you.

Incidentally, one of the things that impressed me with Brooke Castillo was her answer to the question, “should I reward myself when I fill up my Urge Jar?” She said, no. You’ve already gotten the reward for filling up the Urge Jar. 100 times, you acted on your conscious conclusion of what was better for you. As a result, you were rewarded by the better outcome each time. Taking the action that is better for you provides its own reward.

I recommend this tool for anyone committed to consistent rational action.

Share this page
← Next Step vs. Next Goal Take Your Motivational Pulse by Identifying the Mmmm and Stress Factors →