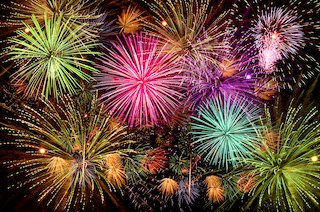 First mine. I give talks, put out this newsletter, and run the Thinking Lab because I want to share the life-serving ideas that I have discovered. I have been striving for years to improve the way I communicate these issues so that it is easier and easier for people to understand them and more importantly, apply them in their own lives.

I got several end-of-year thank yous from people who told me exactly how they had applied my work to their lives. This is deeply meaningful to me because it is objective evidence of my progress in packaging and motivating these ideas.

Two of them agreed to let me share their stories, which I think will be inspirational to you.

Besides what you mentioned in your article, I'm seeing another benefit from the systematic achievement review. It is giving me ideas about how to have greater success in future. For instance, I remembered that early this year I got really close to getting my employer to create a new position that was exactly what I wanted. (I didn’t get it, but it’s a big deal that I got so very close.) I realized that I did this by cultivating deep relationships with a few people that I really respect, with whom I simply enjoyed working. I realized this could be a good strategy to work towards long term career goals while still gaining values in the moment, especially since I’ve already had some success this way.

This insight alone has already made the review more than worth it. It will definitely influence the new goals I set and likely lead to more success than had I not done the systematic accomplishment review.

Reviewing your accomplishments for the year sounds like a routine activity. Most people assume they already know what they did. But Kyle's experience is typical. There is a lot of success to review (even in a bad year), and it is always inspirational and instructive. You learn something about yourself.

You don't have to do this on New Year's. You can do it on your birthday. Or Labor Day weekend. Or on your annual vacation. But it really is worth doing it. I am gratified that one blog post made the case clearly enough that Kyle chose to go through this process and benefit from it. And even more excited to hear how his insights will enhance his future.

The other letter I wanted to share was a cashing in on a talk I gave at the Ayn Rand Institute (ARI) conference in 2019. It was recently made available for free by ARI. I am not sure I even mentioned it in the newsletter, because it presupposes that particular audience. But I heard from Shea Levy, a researcher and engineering leader, about how those ideas had been helping him at home. He wrote:

I wanted to share a success story with my son Colton that would not have been possible without your work on motivation and values. He has long resisted going to sleep at a healthy hour and we've had frequent struggles trying to help him stay healthy and avoid crankiness (not to mention giving Alyssa and me some time to unwind before bed!).

Last night, following up on a discussion earlier this week, he and I had a long conversation before bed where I let his knowledge and values drive his decision about what to do. I guided him through the reasons he has for wanting to sleep and wanting to stay awake, encouraging him to avoid giving me the answer he thinks I want and suggesting a few things on both sides that he did or didn't agree with. I helped him reframe the emotions and disvalues in terms of values he understood. When he decided after careful thought that he did want to go to sleep, I helped him set his room up for success and kept him on task, reminding him it was his decision and giving him space to rethink it when some urge to play seemed overwhelming.

He was asleep on time! I can't remember such a peaceful bedtime since he was a baby. At one point after his decision he said something along the lines of "sometimes the thing you should do is not the thing you want to do," and I was able to help him distinguish wanting to do it (which he still did want) and feeling like doing it, which I couldn't have done without your work. And then I helped him through some techniques to manage that feeling as best he could in the moment and reassured him that over time if he thought about things and made decisions this way, his feelings would adjust accordingly, which I wouldn't have been likely to emphasize before.

The thought that this little boy is learning this life-changing lesson so early is thrilling to me. So is seeing Shea applying these ideas as fast as he can. And of course, that he and his wife will have some couple time.

As a teacher and a coach, I don't get credit for their successes. They did all of the work.

I hope you, too, have been able to apply the ideas I've been writing about. I would love to hear your stories, too. But mostly, I hope you will celebrate your success. Congratulations!