A Value-Based Approach to Interrupting Others 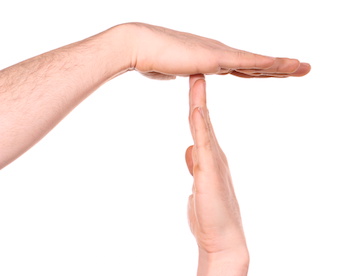 A friend once told me about a man he knew who never interrupted. Call him the super listener. You could go to this super listener for business advice, and he would sit and listen to you as you talked and talked, never interrupting. Then when you were finished speaking, he would give you brilliant, pertinent advice. You could tell that he had understood everything you said — he had really listened.

It sounds wonderful for the talker, but given how much information the super listener was alleged to have taken in, I have no idea how he did it. I often find myself overloaded or confused when people talk at length without checking in with whether I'm with them or not. I find I need to interrupt with clarifying questions if I am to follow them.

I used to feel guilty about interrupting, because interrupting is "not polite." That changed when I learned interruption skills from Jeff Brown, the certified CNVC* trainer who I bring in to teach two of the four days in my intensives on "Rationally Connected Conversations" (RCC). Interruption skills are a simple application of the RCC approach which shows that the method is neither "nice" nor "mean," "polite" nor "rude." It is an authentic valuer's approach to interacting with others.

Interruptions are symptoms of a problem that you need to handle in the moment. The trigger for an interruption is your own internal conflict — you had been listening to the other person, but for some reason, you now want a turn to talk or you want to exit the conversation, and you'd like the other person's cooperation with this change of plan.

When you started listening, you didn't expect a conflict. If you want to handle the conflict effectively, it behooves you to become clear on your full value context. That is what the RCC self-connection process helps you do. The two key steps are identifying your feelings and then identifying the deep rational values at stake for you at that moment.

For example, if you are overloaded or confused, you probably want clarity or direction in the conversation. If you are bored, you likely want intellectual stimulation — which may or may not mean ending the conversation.

Your feeling may be unrelated to the conversation per se. Perhaps you're afraid, because it just occurred to you that if you can't get out of this conversation, you will be late for your next appointment. You want closure. Or perhaps you're sad due to some difficult issue in your life that the other person doesn't even know about, and you don't want to discuss with him. You may want alone time.

In these cases, the feeling is like an arrow pointing directly to the top value at stake right now. You immediately become clear on a valid reason to interrupt, and you just need an effective way to do so. I will get to how to interrupt in a moment.

But, there is a reason we say that feelings are not tools of cognition. Sometimes your feelings reflect unjust, self-critical, or just plain false thoughts. You might feel angry because it seems like the other person doesn't care about what you think, (Presumably he does.) You might feel embarrassed, because you think you that your confusion is indicative of something wrong with you. (There is nothing "wrong" with being confused.) You might feel frustrated, because "he just wants to hear himself talk." (Let's stipulate that this is at best an exaggeration.)

These feelings are real and the thoughts underneath them are real. They can seem valid. But if you blurt them out, or otherwise act on them directly, you will get yourself into trouble.

In-depth introspective techniques tackle mistaken and irrational thoughts directly, with an in-depth process. They guide you to test the veracity of your thoughts, then to dig deeper into why you think a mistaken thought, how it is distorted, and how you can collect evidence to convince yourself it is untrue. (See Mind Over Mood and When Panic Attacks, references below.)

These methods are excellent, but when you are in the middle of a conversation, you do not have time for deep self-analysis. Nor is tuning out the other person conducive to better communication. What can you do? You need a rational direction, right now.

The RCC method solves this problem by sidestepping it. Instead of tracing out the exact sequence of steps until you find the error, you start with a list of possible rational directions. You then pursue the rational direction that best fits the current situation, in your judgment.

The RCC method provides a relatively short list of deep rational values, such as clarity, direction, efficacy, health, cooperation, trust, and communication. (See below for longer lists.) These values are abstract, widely relevant, and deeply connected to success for a human being on Planet Earth.

Multiple choice or essay question — which kind of test is easier? The list of deep rational values turns a complex introspection process into a multiple choice question.

After you have identified your feelings, and your reasons for feeling them, you will have activated relevant deep values that are stored in your subconscious databanks. You then look at the list, and simply recognize the deep rational value(s) at stake right now, in this moment.

At another time and place, I might have been offended and angry, and gotten into an acrimonious argument about when it is proper to interrupt. That would have been a shame.

Fortunately, I had on my RCC hat. I knew I was genuinely interested in understanding what he was saying. The deep value at stake for me was communication — which is the joint awareness of the same fact by two people. Seeking alignment, I said to him, "Would you agree that we need to stay together — that I need to understand what you're saying?" He agreed with that, and I agreed to be patient for a little longer.

Well, a few minutes later, I interrupted again — this time to express my needs. He had been speaking very abstractly, at length, and I just couldn't make heads or tails out of what he was saying. I said, "I must protest. I literally don't know what you are talking about." I said I needed something concrete to connect it all to. He got it, he explained what he meant, and we continued our very interesting conversation.

The RCC method helped me stay focused on what really mattered to me (communication), rather than distractions like whether it was polite to interrupt. And it helped me be strategic when I got pushback from my friend — by leading me to seek alignment first, and expressing my needs second. It's always easier to be heard after you've established some kind of mutual agreement.

In that conversation, I was not caught up in whether I was being "nice" or "mean," "polite" or "impolite." I was value-focused. As a result, I was able to handle a conflict constructively. That's the benefit of the RCC method.

*CNVC is the Center for Nonviolent Communication, the organization Marshall Rosenberg founded to promote his methods of communication. Rosenberg's Observation-Feeling-Need-Request (OFNR) process is the engine of the Rationally Connected Conversations method.

Share this page
← Introspect So You Can Take Action Brainstorming by Yourself vs. in a Group →