Acknowledging Emotions, No Matter What 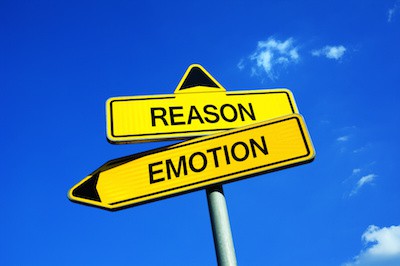 In this article I am continuing my campaign to end the battle between reason and emotion. I'd like to address another facet of that battle: the problem of bizarre, intense emotions.

First a story, then the explanation.

Some years ago, I held a small monthly discussion group for an association I belonged to. The discussions had a loyal following, but not among any of the leaders of the organization. Quite the contrary. The leaders created so many difficulties for me in publicizing and running it, that I finally decided to resign from running the group. After resigning, as I was trying to clear up a few loose ends and hand over the group to a successor, I found myself outraged and intensely distressed by the same kinds of issues that had caused me to resign.

I tried recalibrating the emotions, but I didn't get very far. I really thought it was nuts that I was so upset. I'd resigned from the role, for goodness sakes! Who cared what further shenanigans were going on? I could name all the thoughts going through my head, but I genuinely didn't see why they were upsetting me so much. Sure, I could be irked. But outraged?

I could not get this idiotic, unimportant issue off my mind. Every time I tried to sit down to do something productive, I worked myself back into a tizzy over it.

At a certain point, I realized my error. I needed to just acknowledge the intensity of the feelings, without requiring an explanation. There was some important issue here. It was not idiotic. It was not unimportant. It had to be something of deep personal significance to be causing me such distress.

I didn't know what it was yet, but I needed to recognize that there was something buried there — something yet to be identified, since nothing I had named explained what I felt.

As soon as I said, "Wow, this is really important to me. I don't know why, but it is," I calmed down. I made a note to myself to keep an eye out for further information on this puzzling emotion. And I was able to settle down to work.

Now, what is the explanation for this?

The way it's usually phrased is, "you shouldn't judge your emotions." I think this is a confusing formulation — so let me try to explain my own approach, using an analogy.

Emotions are just reports from your subconscious. An emotion is the messenger. It is illogical to criticize the messenger regarding the content of the message. The message originated elsewhere.

As a messenger, an emotion's primary purpose is to get your attention on the message. Until you acknowledge the message, the emotion will keep ringing the doorbell, trying to get the message through.

That's why I couldn't settle down to work. Although I had tried to acknowledge the emotion, I was off somehow. I couldn't immediately introspect the source of the intense feeling. I wasn't getting the message — I couldn't identify the underlying thought that would cause such an intense feeling.

And yet, I was telling myself that the underlying thought was nuts. Idiotic. Unimportant. How could I tell it was idiotic if I hadn't identified it? How could I claim it was unimportant, when emotional intensity is a measure of personal importance?

The lesson I learned here is that you don't need to be able to analyze an emotion completely to be able to calm it. You just need to fully acknowledge it — even if you can only do that in general terms, as I did here.

That's fortunate — since it is too much to ask yourself to immediately ferret out the deep cause of any intense emotion.

It remains to be proven that the underlying evaluation was illogical. But judging it as idiotic and unimportant prior to identifying it was certainly illogical.

This is a concretization of the following fact: if you want to go by reason, you need to understand the nature of emotions. And be willing to acknowledge them for what they are. They are not oracles of truth. They are messengers from the subconscious, reporting in.

Acknowledging the emotion, truly acknowledging it, is the logical thing to do, no matter how nutty it seems on the surface, or how mistaken the underlying thought turns out to be. Acknowledging that it exists does not mean you agree with it. It does not mean you act on it. It means that you recognize that it's a messenger that will continue to try to get your attention until you respond, "message received."

And it means that you recognize that whether the underlying thought is true or false, it is filed as important in your subconscious — and is therefore worthy of attention.

I didn't circle back to understand that particular incident in more depth. But my reflection about it sensitized me to a certain class of people problems, and I later worked through similar problems with people who are more important to me. But I could only work through them because I hadn't jumped to the conclusion that I was an idiot for having an intense, bizarre emotion.