Accepting Reality as the Key to Minimizing Suffering

Series: The Concept of Happiness 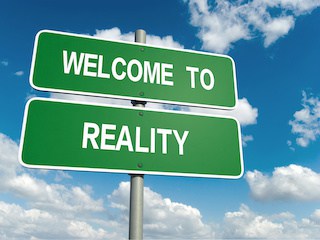 In the previous article in this series on happiness, I argued that it is important to your happiness that you fight suffering, that you develop skill at minimizing it. I then gave some practical advice on how to mitigate suffering: say “no” to overload, don’t be afraid of mourning, and campaign against chronic pain. Those three tactics reduce to one fundamental principle for minimizing suffering: Accept reality.

What is “accepting reality”?

You may be wondering what that means. How could you not accept reality? In fact, accepting reality takes purposeful effort. You can see this clearly in the case of mourning for a loved one.

When a loved one dies, you lose a value and your life will never be the same. This typically leads to thinking a lot about what might have been in the future, what you wish had been different in the past, and why you don’t like the new situation in the present. And yet, there is literally nothing you can do about the fact that the person died. You spend your time wishing facts were different from what they are, when that is literally impossible.

In the case of the loss of a loved one, having such thoughts is not only understandable, it is a predictable state. But ultimately you need to focus on what is, not what isn’t. You need to think about how to gain your values, given the facts, rather than think about what you could have done if the facts were different. That is what it means to accept reality.

And it is not instantaneous. You cannot simply choose to have only thoughts consistent with the facts of reality.

In truth, those wishes are connected to real issues that need to be addressed. For example, suppose the husband in the marriage set up all of the computers and electronic equipment. When something goes wrong, his wife will feel not just grief that she doesn’t have him to help her, but perhaps self-doubt (if she doesn’t know what to do) and anger (if she thinks he should have left clearer labels) and frustration (because what used to be easy is now difficult) and despair (because this is just one of likely hundreds of issues she needs to address now that he’s not by her side).

Is it any wonder that along with all of these issues, the widow also wishes that things were different than they are?

This constellation of thoughts occurs spontaneously as a result of values being activated. They are in the form of evaluations, which automatically trigger emotions.

This is why grieving for a loved one typically takes at least a year. It takes time to address all of the issues. As a consequence of dealing with each issue, she will reprogram the knowledge and values in her subconscious databanks. Over time, those databanks will come to reflect the “new normal.” When that happens, her emotions will no longer be so disruptive and she won’t experience so much wishful thinking. She won’t have the immediate difficulties, and her memories of her husband will trigger sadness and wistfulness, not despair and anger. She will have reintegrated her knowledge and values to take into account the loss of her husband. She will have come to terms with her loss.

That is what it means to accept reality.

So how do you not accept reality?

You might wonder, doesn’t everyone do this? No. Sometimes people pay lip service to a fact, but don’t actually rethink their lives to take it into account. A classic example is a person who is still obsessing about past arguments with a spouse whom they divorced years ago.

You would think that it would be obvious you need to accept reality. It is likely obvious to the widow because her husband is not there. But in many other cases, it is not so obvious. And even if the facts are obvious, that doesn’t mean you have to accept them. As I showed above, accepting reality takes purposeful effort; sometimes people don’t want to expend that effort. The zero-effort default is to go by their emotions, and these are not guides to accepting reality. Quite the reverse.

Remember, the main emotions that arise in suffering are grief, despair, frustration, and even self-doubt. Fear and anger can be sprinkled in for good measure, too. When people are thrown into suffering by some calamity and they don’t accept reality, a common reason is that they don’t know how to deal with these emotions. Such disruptive emotions distract them from living their lives. They remind them of their loss. They put them into conflict and make them feel miserable. As a result, sometimes people come to view emotions as the problem.

It is understandable that some survivors might want to just shut out those feelings or avoid issues that trigger them. And as a practical matter, it may be impossible to deal with them all at once. To function at a minimal level, they may need to suppress some disruptive emotions temporarily so that they can make sure they eat, shower, and pay the bills.

But some people will choose to shut out the emotions with no intention of ever sorting out the underlying issues. Others will choose to escape from them to the fantasy of what might have been if only the calamity hadn’t happened. Neither will ever reintegrate their values around the new facts. This failure has a similar psychological effect as denying those facts explicitly. Without being able to face the facts, they won’t be able to find a way forward. They will get stuck and will be unable to move on with their lives.

This is what it means to not accept reality. And this failure, not the calamity itself, is the root cause of perpetual suffering.

So how do you identify and solve the problem(s)? Especially with so many disruptive emotions swirling around and distracting you?

The emotions are your best lead for figuring out what is really going on. The negative emotions involved in suffering are alerts to threats to your values. If you introspect them, i.e., identify what you feel and why you feel it, you can figure out if the threat is real and actionable, and more importantly, what the value is that you really want.

When you’re suffering, it can seem like you can’t gain your values. The widow feels as if she can never be happy again. The person who has been through a natural disaster feels as if he will never be safe and secure again. The truth is that you may never have some specific value in your life again, but you always can gain the deeper values that gave a concrete value its meaning. But to do that, you need to understand those deeper values. They are rarely obvious.

Identifying those deeper values takes skill at introspection. But once they are identified, the turmoil quiets down. You come to a place of serenity where you can catch your breath. You have accepted where you are, seen what you’ve lost, seen what is still at stake to gain. And, when you have a little more energy, your deep values give you a frame of reference for taking action that will bring you to happiness again.