You always have a choice 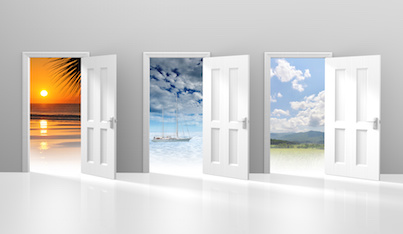 Whenever I hear myself or someone else saying, "I have no choice," I challenge that idea. You always have a choice -- and owning your power of choice has huge benefits.

When you think you have no choice, that just means you've ruled out the other options that you see. Here are some examples of how this comes up:

In each of these cases, you do face a choice, but you believe there is nothing to think about. You believe the right answer is obvious.

Sometimes the best choice is obvious and there isn't anything else to think about. For example, suppose your boss wants you to stay late to prepare another point for a 9:00 a.m. meeting. You also want to do that work tonight, because you see that this will help to ensure your most meaningful project gets funded next year. Your plans are flexible, so you make a few calls and stay late. No problem. It's a no brainer.

There is a world of difference between saying "this choice is a no brainer" and "I have no choice."

My observation is that people only say the words "I have no choice" when they mean, "this is a difficult, potentially painful choice with high stakes and I don't like it but I already know what I have to do so I have to just suck it up and do it."

Difficult, potentially painful choices with high stakes need more thinking, not less. But as soon as you say, "I have no choice" or "I have to," your mind shuts down, your creative faculty goes into hibernation, and you respond emotionally like an animal being driven by a whip. This is the persona of the victim of external circumstances, who has no control over his destiny, rather than the ambitious person who consistently identifies the best possible way to move his life forward.

Rather than being a victim, the alternative is to reclaim your sovereignty by examining your options -- and then making a choice based on which you prefer, based on the full context. Which of these options offers the bigger value to you, taking into account both the short and long term?

Looking at the options that you discarded out of hand helps you become clear on more of the relevant facts and more of the values at stake. You get clearer on the whole context for the decision.

For instance, let's go back to the situation in which the boss wants you to work late, and you feel forced into it. The first thing to do is to look seriously at what happens if you don't work late.

There are negatives -- such as he could start a proceeding that would in fact get you fired within a short time, or you might feel guilty saying "no," or an important project might get delayed or canceled, or a customer might be angry.

Presumably there would also be positives, such as you could engage in the evening activities you had scheduled, you'd get more sleep, and you wouldn't feel resentful. And, maybe, if you're lucky, the boss might learn that you have a life, which you take seriously, so that he needs to negotiate for overtime, not demand it.

I'm just speculating here, to concretize the kind of information that comes up.

I guarantee that one or more of the factors will trigger intense emotions. Perhaps you're terrified of losing your job, because you are just barely feeding your family. Perhaps you feel despair that you will never learn to say "no," because you feel like you've been a pushover. Perhaps you're horrified at the thought of failing the customer, who you care about deeply.

The intense emotions are the reason that you feel you have "no choice." The awfulness of that option is emotionally real to you, so it seems crazy to consider it.

But emotions just reflect past evaluations that may or may not be valid. Before acting, you need to understand the values at stake on both sides of the choice, and make a decision based on pursuing the biggest values, not avoiding the scariest feelings.

You may make the same choice.

Sometimes when you get at the deep values, the "no choice" becomes a "no brainer."

Perhaps your staying at work tonight will help your customer break through on a critical problem -- and that is deeply meaningful to you. Once you realize that's the real issue, you choose to stay late, because that is truly what is most important to you.

Or you may realize that there is just some old baggage stopping you from making the forbidden choice.

Perhaps you've been actively learning how to "say no" better, and you realize that it's only an old fear that is stopping you in this case. You decide to use your new skills and stand up to the boss.

Or maybe you realize there is a third way, a creative solution in which everyone gets what he wants. A virtual assistant in India can get the slide ready for the boss's 9:00 a.m. meeting, so there's no need for you to stay late.

When you examine the forbidden choice to see the values at stake, you re-conceive the issue as a "no brainer," "old baggage," or a false alternative. All of these free you to make a consciously life-promoting choice.

For example, in the case of "no money" for the plastic surgery, the decision might be a no-brainer. Maybe you don't care about your nose that much, and you'd strongly prefer to save money for a vacation. Or maybe it's old baggage -- you were so embarrassed about your nose, that you repressed the pain, and really, really want the nose job. It's worth saving for. Or maybe there's a creative alternative -- you could learn fashion and makeup and turn your nose into a part of your style.

Or in the case of "having to pay" for the dinner, the decision may very well become a no-brainer. If you value honesty, integrity, productiveness, independence, and justice, in most cases it would be clear that not paying would put you at war with the waiter and the whole establishment, besides turning you into a mooch. Paying your way is in your self-interest.

On the other hand, it could be that old baggage is getting in the way of seeing your options. Maybe the dinner was inedible, the service rude, and the table dirty. You don't want to pay because you don't believe you got the value that was promised, but you also are terrified of making a scene (that's the old baggage) if you complain to the management and request that the bill be reduced or waived. Well, you do face a choice. You can hold your nose and pay, avoiding a scene. You can confront the manager even though it will be scary. Or conceivably you could leave without paying and accept all of the negative consequences of stiffing the restaurant -- which might include your not being welcome at this restaurant, and possibly their taking you to small claims court. Dealing directly with old baggage is never fun, but it sure beats being driven by it.

Finally, you might realize there is a creative alternative. Suppose that you don't want to pay because you don't have enough cash. Your date walked out on you, and you only have enough money in your pocket either to pay the bill or to get home safely. Well, it won't be the first time that management has heard a sob story and accepted someone's promise to come back and pay later.

You probably noticed that in each of these cases, I painted a different scenario with radically different values at stake. I don't know the real choices behind your "no choice" -- and neither do you until you look.

I am not saying that you ought to choose differently in cases where you think you have "no choice." Your "no choice" may actually be a "no brainer" when you look at it more carefully.

I am saying that it matters for your long-term happiness and sense of efficacy that when you think you have "no choice" you consider the option you've rejected out of hand, and make a conscious, considered decision based on all of the values at stake. Because you really do have a choice, and it matters for you that you know it.