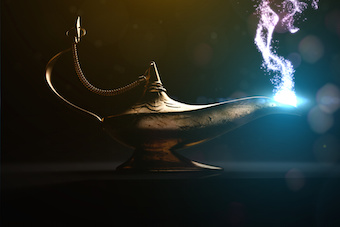 Wishful thinking doesn’t solve problems. But it can transform your motivation when you are not “in the mood” to do the next task on your agenda. I stumbled upon this fact while on a long trip.

At a certain point, I thought I should dig into four annual reports I had brought along. But I felt, “Ugh. I don’t want to.” As I paused on that depressing note, I felt a little wistful. I said to myself, “I wish I were motivated to read those reports. I’d really like to clear that backlog.” (They were the last from a large pile.) Suddenly, I wanted to finish. I reached for a report, and read them all through without stopping.

I was surprised by this painless about-face, so I reflected on it later. Let me explain why it happened and how to replicate that success. I call the technique, “wishing for motivation.”

Wishing “worked” because I was not in serious conflict, just feeling a little lazy. In that low-key state, I could sense a wisp of desire at the back of my mind. By “wishing,” I gently turned my full attention to that desire, which in turn triggered good reasons for reading the reports.

Emotions follow from values. Once those values were front and center, desire followed.

Don’t get me wrong. I wasn’t passionately excited to read the reports. I didn’t need to be. Mild interest can overcome sluggishness.

I turned this observation into a technique: If I notice I’m delaying getting started on something, I know I need a nudge. I immediately set a timer for 3 minutes and do some “thinking on paper” using these words as prompts:

Chiding yourself with “I should want to do this” also won’t work. That’s more likely to trigger resistant moans and groans and contrarian stubbornness.

Once I feel some desire, I’m willing to consider a microscopic step I could take toward starting.

Here’s a literal example, transcribed from my notebook. I went to lunch in the middle of writing the draft of this article. When I came back, I knew I should resume writing. But I was feeling post-pizza lethargy. Ugh. I hesitated, and then I chose to start a timer, open my journal, and write the following:

“I wish I were in the mood to finish this draft. It’s so much easier to come back when you’ve reached a definite end point. I wish I still had that easy feeling [from when I worked on it earlier] of enjoying telling the story. [I paused with the pen in the air.] I could spend the rest of these three minutes re-reading.”

When the timer rang, I was already hooked. I finished the draft without delay.

Note that I used an act of will to get started. The timer didn’t turn on by itself. The journal didn’t fly to my desk and magically start recording prose. But I needed only a wee nudge of willpower to start, not the mighty heave I’d have needed to overcome true resistance.

This “wishing for motivation” method won’t succeed when you have a serious conflict about starting. Then you need more powerful thinking tactics to help you identify the conflict and resolve it so you can move forward.

But what’s the downside of the method? The next time lethargy strikes, spend three minutes wishing for motivation. Your wish may come true.