Three Signs You Need to Check Your Premises 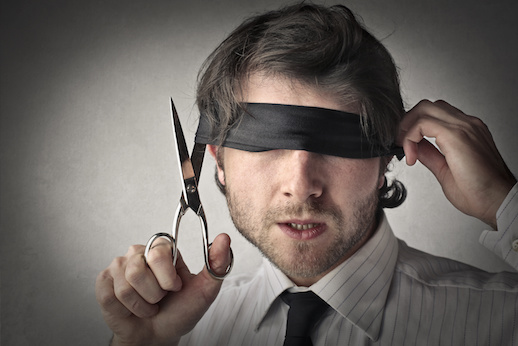 A premise is a past conclusion that supports your present thinking. Her point was that if you arrive at a contradiction in the present, there is an error somewhere in your past conclusions. You need to find that mistake, because otherwise it will sabotage you.

Here’s the problem: mistaken premises can be difficult to spot. You need a special act of self-awareness to catch them and correct them.

A mistaken premise is difficult to catch because it forms a kind of a blinder. Let me explain.

At the time you formed any premise, you concluded it was true. It may even have been true then, but some factor in the world has changed since that time.

In every choice we make, in every conclusion we reach, in every outcome we predict, we rely on our past conclusions. What we have previously established as true or good or important provides an automatized context for concluding whether some new idea is true or good or important. We couldn’t function at an adult level without this context; we’d be like a mentally disabled adult, seeing only what is in front of him, without the wherewithal to project much into the future or learn much from the past.

For the most part, our automatized context of conclusions serves us well. But when there is a wrong premise in the context, it distorts the calculus. It means that a new idea is tested against a false one. You can easily reach a new mistaken conclusion.

To concretize, imagine you were in a neighborhood that you had visited many times. On your way out to the highway, you take a shortcut. But en route, you see a sign that indicates the highway is in a different direction. How would you judge that new information?

You might very well conclude you know better, especially if you had an explanation for why your shortcut wasn’t marked. It is normal to trust your own mind.

However, it is possible the traffic pattern has changed, and your “better” way is no longer an option. If that’s the case, you will wind up taking the long way around, not a shortcut. You won’t figure out that you’re making a mistake until you follow the premise all the way through to failure.

When a few minutes delay is all that you risk, it may not matter how soon you catch a mistake.

But as the stakes get higher, you need an early warning system to alert you that a premise deserves checking. Here are three signs that I use to warn me that I should consider whether I am operating on misinformation:

Surprise is the ultimate “does not compute” signal, and a definite sign to check your premises. And yet often people assume that the new information is misleading, rather than that they have made a mistake in their thinking.

For example, an experimental researcher I know found she had to train new graduate students to take surprise seriously. When an experiment gave a surprising result, their default reaction was to re-run the experiment rather than check their premises. But surprising outcomes indicate new factors that were unknown.

Some great inventions come from following up on surprising results to learn something new.

2. A Pattern of Failure

When things go wrong in the same way, again and again, despite your effort to the contrary, it’s time to check your premises.

For example, if you’re having the same argument escalate again with the same person, you know for sure that you are not discussing the real issue. Or if you’re having trouble getting to work on time, despite troubleshooting the issue, you know that you have not identified the root cause of the tardiness.

“I have no choice.” “It’s impossible.” “I can’t.” Whenever you see yourself as the victim determined by circumstances, you know there is a premise to check.

Don’t get me wrong, there may be an objective problem, but whether to solve it and how you solve it is your choice.

For example, I remember being disappointed that I “couldn’t” take a class on Human Anatomy and Physiology (A&P) in my senior year of high school. It didn’t fit with physics, which was required for college. My younger brother proved that premise wrong. He took physics as a junior, so he had the flexibility to take A&P as a senior. I had not valued A&P highly enough to make it a priority, which includes planning long range to make it possible. He had.

There can be circumstances which make it difficult to achieve a specific goal. But if that goal is literally impossible to achieve, it is illogical to aim for it. Having it as a goal is based on a wrong premise.

On the other hand, if the goal is very difficult, it’s important to acknowledge that going after it or not is a choice of priorities. A difficult goal may require significant time and energy. You may need to drop lesser goals that would prevent you from achieving it. You may need to plan over time to ensure you can achieve it.

It is not true that you can “have it all.” You can have what is most important to you. Facing your actual choices often takes challenging old premises.

When you have a wrong premise, one way or another it puts you on a path to failure. That’s why eliminating wrong premises sooner rather than later is so important to success. The first step? Pay attention to these three signs that you need to check your premises: Surprise, A Pattern of Failure, and Victimhood.