Three Principles for Releasing the Pressure of Perfectionism 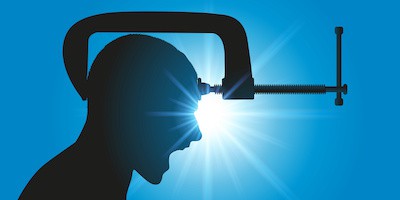 In my previous blog, I made the case that sometimes the logical, moral, and practical option is to do B-minus (B-) work. This can feel excruciatingly difficult if you are tempted by perfectionism.

I was reminded of this recently when I tried to write an article on goal-setting. The article was due in a few hours and I was having trouble writing it — actually rewriting and updating an earlier article. It just wasn't good enough, and I was tied up in knots. As a recovering perfectionist, I have felt this pressure many times. It feels like a vise on your head that stops you from being able to think.

When you're in any conflict, I recommend that you give the contrary motivation a fair hearing. I turned to my journal. I verified that the problem was indeed perfectionism, the best solution was B- work, and I did not want to do B- work.

I growled and rebelled at doing B- work. That was my signal to draw on three principles I've developed that I can use to release the pressure to get back on track. It took 12 pages and perhaps an hour, but as a direct result of that journaling, I wrote two articles in about three hours total. Here are the three principles I drew on:

My ordeal had at its root the idea, "I have to but I can't." "Have to" is always the source of pressure, and it's always based on a falsehood. You always have a choice. You may not like your choices, but you do have a choice.

To get an objective view of the situation and see your choices, ask yourself why you think you "have to" do something.

When I considered what would happen if I didn't finish on time, I saw that my schedule would get squeezed in several places over the next week. The actual situation was that I wanted to write a good article on goal-setting, I wanted to finish in the time I had allotted, and I wanted this so my week would be easier. I just didn't see a path to success.

But that's not what I felt. I felt pressure. That was because instead of accepting the facts of the situation, I was shouting at myself, "BUT YOU HAVE TO!"

There's only one reason to shout at yourself. It's to block out dissenting voices. That stifling of thoughts and feelings causes the feeling of pressure. It's never a good idea. It's the opposite of giving contrary motivation a fair hearing. It's personal censorship. This pretty much guarantees that you will make a poor decision.

To be clear, giving contrary feelings a fair hearing doesn't mean you act on your feelings. It means you identify what you feel and why you feel it, so that you are aware of all known value issues. When I truly examined the pressure in this case, I was surprised to realize that the source of the problem was that I had a question about goal-setting that I wanted to solve for a class the following week, so I wanted to take the time to work out the issue properly. There was a bona fide reason for wanting a higher quality product in a longer time. But that would not help me with my deadline.

The principle is: pressure is self-created. If you're feeling pressure, you can't think straight because you are censoring some ideas. You release the pressure by deliberately looking outside the tunnel vision you've created. In this case, looking at what would happen if I didn't write the article made the difference. I immediately became clear on the values at stake in the situation. Knowing I wanted to work out those issues in depth, I no longer felt pressure to write that particular article at that moment.

2. If you're frustrated by your feelings, you're creating a vicious cycle

Unfortunately, untangling the conflict over the topic did not resolve the situation. I still had a deadline for getting a newsletter out. Now I didn't even have a topic!

I was frustrated, because I did not want to delay the newsletter, skip the newsletter, or recycle an old article. Obviously I needed a creative alternative. However, when you're frustrated, you cannot think creatively. You need to have a positive, value-oriented mental set to come up with new ideas.

Noticing this, I then felt exasperated that I was frustrated, because how was I supposed to write? This became a new source of pressure.

Here's a warning: If you're frustrated by your feelings, you're either in the throes of a vicious cycle or you're setting one up. Your feelings follow automatically from your thoughts about the world. They are not the issue. Maybe there is something in the world you want to try to change. Or maybe you are evaluating it in such a way that it makes you miserable. But in any case, the emotions are just alerts to the situation. They are not the problem.

When you treat them as the problem, you create a vicious cycle. If you shut down unwanted feelings or play mind games to stop feeling them, you not only cut yourself off from the information in them, you also treat the feelings as a problem to be avoided.

Anything you avoid consistently becomes marked in your subconscious as an "anti-value," something that needs to be avoided at all costs regardless of the actual issue. For example, have you ever procrastinated on something repeatedly and grown to dread it intensely? But then when you finally did the task, it was no big deal? That is this mechanism at work.

When you treat the feelings as the thing to be avoided, before you know it, you are afraid to feel your feelings and afraid to do anything that might cause you to feel those feelings.

If you're feeling frustration, as I was, there is a cause for it. Sometimes you can determine that quickly, sometimes not.  But regardless, what you need is more awareness, not less. You need to be willing to feel those uncomfortable emotions in order to introspect them and untangle the real source of the problem.

In this particular case, when I put in the effort to understand the frustration, I realized that I was frustrated because I have often given up on timeliness in favor of quality. I had not chosen to do B- work in advance. And as a result, I had built up an unreasoning fear about doing B- work. I thought it would be a disaster. No wonder I was feeling pressure. The logical option felt off-limits.

This was when I embraced the idea of doing B- work, even though it would feel uncomfortable. I saw clearly that this unreasoning fear had built up, and that I needed to use some courage to challenge it and dissolve my aversion to doing B- work.

The principle here is that criticizing your feelings creates a vicious cycle that feeds the pressure of perfectionism. You can break that cycle by taking your feelings seriously and seeing how you have built up an unreasoning fear about something. Once you see how this fear was created, it is much easier to take the steps that will break the vicious cycle. Doing B- work wasn't just the logical thing to do, it was also the thing to do to change this pattern in my life.

3. The goal is to get your mind back into a creative state, not to solve the problem per se

To think clearly and creatively, you need mental "crow" space so that you can hear and consider subtle ideas that occur to you. When you're shouting at yourself, you can't hear much of anything. When your emotions are intense, you're distracted by them.

You get back in mental gear by systematically reducing overload and introspecting the emotions. I addressed both of these issues by doing a written introspection exercise called the "empathy bath”). I started this exercise not knowing how it would help, except that getting thoughts on paper would reduce the overload and identifying what I felt and why would calm down the emotions. This should clear enough mental "crow" space to be able to come up with a creative solution.

I mentioned that it took me 12 pages to get my head in gear. That's because I was over-eager to get a solution. Partway through the introspection, I got the idea that I could just share my journaling in this newsletter. This created a new round of drama, because journaling is always subjective. If I had just shared those pages, you would have been mystified by my writing. The article would have been D-, not B-.

The benefit of doing systematic introspection is that you can deal with the new dramas as they come up. In the end, I needed to get clearer on why B- work would be okay. I needed to deal with my concerns that sharing my journaling would be subjective and unclear. I needed to clarify what B- work would be if I used something from the journaling. The article didn't need to be brilliant and integrated; it just needed to make a few true, clear points.

At some point, I had addressed all of my conflicting emotions. I decided I could do a B- article that included the journaling. That's when I calmed down enough to start writing.

What actually happened was that after I typed up the transcript, I started writing an introduction. That turned into last week's article. Then I re-read the transcript to decide what points I should make. That turned into this article. I wrote both quickly. In fact, they are B+ or A- articles, much better than they would have been if I had included the transcript. Once my mind was in gear, I could find something to say and say it in a relatively short amount of time.

Here's the point: I did not solve the problem of how to write an article when I was dealing with my emotions. The "solution" of sharing my journaling was not a solution at all. But that doesn't matter. All I needed to do was to get my brain in gear. Once your brain is in gear, then you can solve the actual problem that you need to solve. In this case, that was getting articles written on a deadline.

Perfectionism is just a common form of conflict, based on a common fear of "not good enough." It is resolved like any other conflict: give contrary motivation a fair hearing so you get clear on the values at stake. Then be willing to feel the conflict as you pursue one of the values. That will help reveal whatever information you need to resolve the conflict (though maybe not immediately).

But it sure helps to know that pressure is self-created, frustration with your feelings is part of the problem, and all you need to do is to get your mind back in gear. With a little more tender loving care — 12 pages’ worth — that is what I did.

Oh, and that article on goal-setting? I expect it to come out next week.

Share this page
← B- Work Three Reality Checks Before You Commit →