Applying a Thinking Tool to Create a Humorous Speech 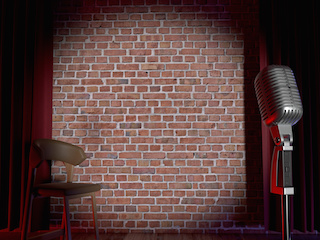 Reading a "how to" book or taking a "how to" course doesn't magically transform a person's thinking abilities. Changing one's thinking methods can be as difficult as changing the established procedures of an entrenched bureaucracy. A person's old ways of thinking feel normal. They are automatized, so automatized that he may not even realize that a different approach is possible. And if he does try something new, he sets off internal objections that encourage him to return to his old habits.

I re-learned this lesson recently as I was preparing a 5-minute humorous speech for my Toastmasters club.

To put this story in perspective, you need to know that I have no natural talent as a humorist. The one time I made a joke in high school, there was a moment of stunned silence before the class laughed. But I believe that wit is an acquired trait, so to develop mine, I accepted the challenge of delivering a humorous speech.

In my course, I teach that flailing is a symptom that you are trying to achieve a result without taking all the necessary intermediate steps. That was true this time, too.

I was surprised and chagrined to realize that I was making the classic mistake in creative work. I was censoring my ideas before I had time to develop them. I needed to suspend judgment regarding whether a topic was funny until after I had given it a real chance to develop.

Here's the point: I know this principle. I use this principle all the time in my creative work. I teach this principle in my course! But in this case, I had no idea I was censoring, not until after I got bogged down and reflected on what had happened. The mistaken process just felt right.

I knew there was only one thing to do—something that didn't feel right. I decreed that the topic for my speech would be living in New York City, and I committed to working on my ideas, even if I  didn't see how exactly I would make them funny.

My entire emotional mechanism opposed the decision. I felt a pang of terror as my insides screamed, "You'll be humiliated!" I braced myself and wrote 500 words about living in New York City.

It wasn't funny. It wasn't even interesting. I felt doom coming upon me, followed by the temptation to drop this topic—it wasn't funny! New topics occurred to me—topics I felt sure would be funnier than this one. But I stuck to my decision.

My first attempt had sounded petulant, so I tried to be more positive. I listed some things I love about New York, and I started writing about them. I made a few humorous observations. On the third pass, I cut out all the boring parts. On the fourth pass, I expanded the funny parts and worked out how to use props and gestures to make them funnier.  Soon, I had a humorous speech to give. And when I delivered it, I, Jean Moroney, the girl voted "Most Serious" by the Sanford High School Class of '81, I made the audience laugh.

I succeeded in giving my speech, because I didn't give in to my subconscious bureaucracy. The entrenched procedure wasn't working, so I made a conscious decision to use a better technique—one I knew, but that didn't come naturally to me in this situation.

It is normal to feel resistance to changing an old routine, and to feel temptation to return to it as you start to change your approach. But when you persevere with a new, better technique, you gain something that you can't get from a book or a course. You observe, in the workings of your own mind, that the new technique has guided you through a difficult task that you couldn't have completed otherwise. Success is the most effective teacher.