The Alternative to a “No Choice” Rule 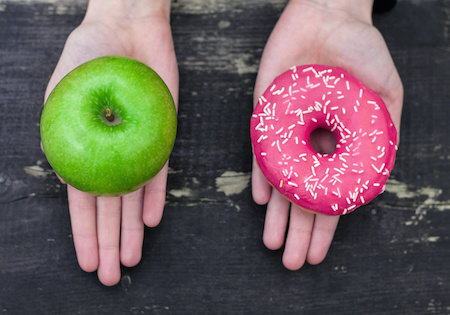 I am halfway through The Beck Diet Solution: Train Your Brain to Think Like a Thin Person. Judith Beck’s exercises, combined with MyFitnessPal, are helping me adhere to a lose-a-pound-a-week diet. I don’t agree with everything in the book, but I give it a qualified recommendation.

My biggest reservation concerns Beck’s advice to tell yourself you have “no choice.” To help avoid overeating, she recommends you make a written food plan the day before (which is good). But if you are tempted to eat something which isn’t on the plan, she says:

Tell yourself that you don’t have a choice. You made a plan, and you’ll follow that plan — no ifs, ands or buts.

Firmly saying, NO CHOICE, decreases both the struggle and the discomfort. [Emphasis in the original.]

I disagree deeply. Telling yourself you have “no choice” may sometimes give the illusion of reducing struggle in the short term, but in the long term, it sets up a vicious cycle of suffering and increasing struggle. Think: lose weight, then gain it back plus a little extra, repeated ad nauseam.

I don’t believe in telling “white lies,” and I don’t believe in trying to fool yourself into pretending that things are other than they are. In this case, it’s particularly destructive. You are trying to get yourself to do something that at some time in the past you predicted would be the right course of action in this present moment, because by some convoluted reasoning you think that manipulating yourself to do it would be easier and more comfortable than just making a fully conscious rational choice now.

Look at the psychological ramifications of such an approach:

This method works by moral pressure. When you feel the temptation or resistance, you shout it down with “NO CHOICE.” What backs up “no choice”? It’s unspoken but it’s understood: if you give in, you are no good. This is motivation by guilt and fear.

Notice the mechanism by which motivation by fear functions: by shutting down thinking. You are not to think for one second about this decision. You are to go by faith that what you concluded yesterday is still correct today. You are not allowed to question that.

And notice the implicit premise in this approach: it doesn’t matter how you feel right now. Your feelings are irrelevant to your choices. Feelings should not be given credence. You can suffer those contrary feelings or suppress them, but don’t take them seriously.

This is the exact opposite of what I teach. The best policy, in dieting as in life, is full awareness. That means thinking more actively when you face a problem, so that you can get to the bottom of it. That means introspecting feelings more deeply when you’re in a conflict, so that you can understand the values at stake in the moment. That then permits you to make choices based on pursuing values rather than avoiding threats, which serves to integrate your value hierarchy, reducing conflict over the long term.

There’s a lot I could say about how the “no choice” method sets up a vicious cycle, but the most urgent question is, what do you do instead?

The appeal of the “no choice” method is that it’s fast and simple, and when you use it, you get instant results. It is rewarded with a shot of pride — or to be more exact, a shot of relief. You’ve passed the test for the moment. You’re a good person.

The alternative I have developed is pretty much the opposite in every respect. It starts with the premise that you’re a good person. That is not in question. Nor is it a test: you sometimes (though not so often) will decide to eat the forbidden food as a result of examining your feelings, but you will be morally satisfied with your decision. When you are first introduced to my method, it does not seem particularly fast or simple. But once you have practiced the method, it becomes fast enough and simple enough and gratifying enough that you will be willing to use it any time you are conflicted about doing something that you believe you should do.

Here is how the method works:

When you feel you have “no choice” but to eat what you planned, you first remind yourself of what that means: it means that yesterday, you concluded that the best way for you to reach your health goal was to eat this and not something else. My assumption is, if that is true, then when you look at the issues fully, the decision to follow your plan will become a no-brainer. The next steps help to look at the issue fully.

To do that, you remind yourself that your conflict or resistance or temptation is a feeling, and that all feelings are caused by the idea that some value of yours is threatened by your intention to stick to your meal plan in this moment.

This means that there is a contradiction between yesterday’s conclusion and some idea (you don’t know what yet) that underlies the feeling. Right now, all you know is that one of them must be mistaken. It cannot both be better for you to eat the food right now, and better for you not to eat the food right now. Two contradictory statements cannot both be true in the same sense at the same time.

The “no choice” method assumes you were right yesterday. But that is just an act of faith. You have some evidence that there is an issue you hadn’t considered. The full awareness method says, let’s look at it.

You want to figure out what is best for you in this moment. To do that, you need to activate the full value context. The method I use for this is something called “Decision Cards,” which I learned from P. J. Eby. In short, you start by listing all of the negatives of each option. You examine them carefully, identifying “intolerable” negatives and adjusting your options (and sometimes your attitude) until you see you face two tolerable options (though they might be unpleasant).

Once you have established that the two options are tolerable, you reconceive all of the motivation in terms of pursuit of values. Motivation by fear is an attempt to protect a value. It can be translated into motivation by values by identifying that value. So, for example, a negative of sticking to your plan might be that you will be distracted by the craving for a candy bar. This means that a positive of eating the candy bar is short-term concentration and reduction of distractions.

Once you have translated all of the pros and cons into positives for each option, it is a simple judgment call to decide which is the best. You then give a one-sentence reason for your conclusion. Why is this the better choice? With the choice and the reason, you will feel motivation to follow through at that instant.

Most of the time, this analysis turns your choice into a no-brainer, and you act on it. You get the same jolt of pride that the “no choice” method gives, but without the need to suppress or suffer emotional conflict. And you get an added bonus: that contradictory idea has been disintegrated. It has a little less hold on you. It will be a little easier to stick to your meal plan tomorrow.

Some of the time, you will decide to have one cookie, perhaps to celebrate the completion of a task. You’ll enjoy the cookie thoroughly and go back to work. Then you might choose to spend an 5 extra minutes on the Stairmaster that night, so that you can make your weight-loss goal, despite eating a cookie that was not on your plan. You end the day satisfied that you have many options for losing weight, glad that you can fit in the occasional little treat. You are more willing to stick to your meal plan tomorrow.

Finally, some of the time, you will realize later that you were mistaken.  Suppose you decided, “I am going to eat one cookie now, because it will satisfy my craving and let me concentrate.” But then you see in hindsight that you ate 3 cookies, and promptly dozed off. So you couldn’t concentrate anyway. And then, one hour and fifty-eight minutes later, you were craving more sugar.

You have now given yourself evidence that sugary snacks undermine concentration — something you obviously didn’t know, or you wouldn’t have thought you’d be able to concentrate. You can feel satisfied that you have learned a real lesson, from firsthand experience, which will make it more compelling for you avoid sugary snacks in the future. You will see more clearly the risks of not sticking to the meal plan.

In contrast, if you had just eaten the cookies without this kind of thought, you would properly feel guilty about it, and that guilt would overshadow and confuse any evidence you might get about the effect of the sugary snack on your energy level. You would not associate any loss of energy with the sugary snack. Rather, you would attribute it to guilt. You wouldn’t learn anything from your mistake — but you would reinforce the idea that you really are no good. You would be discouraged, and less interested in even looking at your meal plan for the next day.

The principle is: trust full awareness. If your preconceived notion is clearly the best course for you, then examining any conflict about it will turn your choice into a no-brainer. And if it isn’t, choosing based on the full value context will help you untangle the value issues at stake, helping you see all issues more clearly. Over the long term, that makes sticking to a diet — or creating any other life-affirming habit — that much easier.