Remind Yourself It’s a Hump, Not a Hill 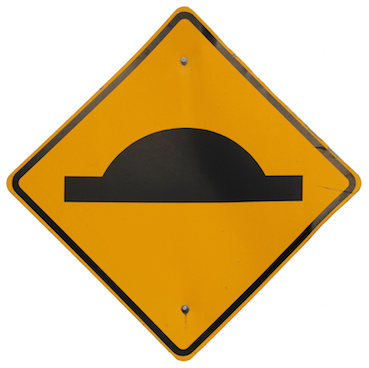 Much of the advice for curing yourself of procrastination comes down to "just get started" or "just take a little step." Once you start on a task that you've been avoiding, you often find that the work develops its own momentum. If you can just get started, you can get over the initial hump of inertia, and move forward to completion.

Sometimes you are tempted to procrastinate on a project because there is a significant obstacle that you need to deal with. You face a hill, not a hump, and you need to bring your A-game to climb over it.

The problem is, you don't necessarily know whether you face a hump or a hill before you start. At 10:00 p.m. the other night, I decided to clear a few emails before going to bed. I specifically wanted to answer some queries related to a Toastmasters event that I'm organizing. One of them, my friend Lenore's, had been sitting in my inbox for about a week.

I was tired, but I thought that I had enough energy to zip through the responses. Unfortunately, when I got to the note from Lenore, I realized I needed to put on my thinking cap to make some decisions about how we would reach out to clubs in the area. Uh oh. At 10:20 p.m. on a Friday night after a busy week, I didn't have the brainpower to figure out anything. Just identifying the problem used up my last reserves of energy for the day. No wonder this email had languished in my inbox.

You might think I felt badly, but I didn't. I felt no guilt, no discouragement. I simply identified that I needed to schedule brain time earlier the next day to answer Lenore. I closed up the computer and started to read a novel.

This was a little failure. My expectations were wrong. My goal was not achieved. But I took it in stride, and adjusted my expectations.

If you think this genial response to such a failure is normal, I congratulate you.

For many people who tend to procrastinate, it isn't. For years, when I was tempted to procrastinate, I held myself to an absolute standard of success. I would "take a small step" only because I believed it would manipulate myself to get the work done. If I completed the work, I had done well. If I didn't complete it, I hadn't. If my effort had fizzled the way this one did, I'd feel discouraged and become self-critical.

I don't have that problem anymore, because I make the decision differently.

What I didn't tell you is that when I first considered starting email at 10 p.m, I was tempted to procrastinate. After all, it was late, and I had only a modest amount of energy. But I didn't think I needed much energy. I overcame the resistance I felt, not by saying "take a small step" but by telling myself, "it's a hump, not a hill," and then asking myself whether, given that, would I be willing to take that first step? I was and I did.

Making my assumption explicit made the difference in how I reacted when I discovered I was climbing a hill, not scooting over a hump. When my assumption proved wrong, I was free to change my mind -- without guilt -- and I also learned important new information about the task. I needed quality time to reply to Lenore.

These days, whenever I feel I "should" do something, but I "don't feel like it," I don't just "get started." I consider whether I think the obstacle is a hump or a hill. If I believe it's a hump, I am willing to take that first step -- because I expect to gain momentum. If it turns out that the momentum doesn't materialize, I'll get new information and a chance to change my mind.

The wider point is that this is the kind of decision that leads to success no matter what -- because you are fully conscious of your reason and your expectations. You succeed as anticipated if your expectations are right. You succeed a different way if they're wrong, because you learn crucial new information, directly relevant to your undertaking.

But the narrow point is "it's a hump, not a hill" are words worth remembering for those times when you're tempted to procrastinate.

As I read that novel that evening, I started to doze off. I thought "I should go to bed" but I felt resistance. Getting up to go to sleep was "too hard." Fortunately, a few key words flitted through my mind: "It's a hump, not a hill." I rolled off the couch, staggered into the bedroom, and went to sleep.