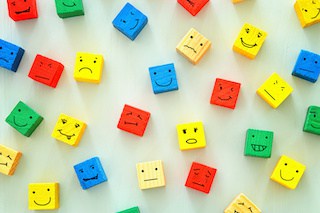 It happens to all of us. You decide your priority, you sit down to work on the project, and for one reason or another you go nowhere. Maybe you're not doing the work — you're resisting it. Or maybe you're doing it, but slogging along without much to show for your effort.

When a general-purpose tactic like "thinking on paper" or "complaining" doesn't help you get back on track and moving forward, naming your emotions can be a powerful way to diagnose what the problem is.

Let's take the first kind of case: resistance. When you're resisting doing the task, your dominant emotion will likely be either fear or aversion. These emotions are alerting you to different problems needing different solutions.

Suppose you are resisting making a phone call. Maybe it will be a difficult conversation in which you have to tell someone he messed up. Or maybe it's a cold call you need to make to promote your career or business.

If you know the danger you're anticipating, you can do something about it. Maybe you can eliminate the danger with preparation. Perhaps you should role-play the conversation with someone else, so you know you won't be rude or unprofessional. Perhaps the danger isn't real. What is the real danger of someone hanging up on you? Maybe you should ignore the fear. Or perhaps the danger is justified — it is very likely that the person will get angry — and you need to plan for that contingency.

In contrast, when your dominant feeling is aversion, the task itself is a disvalue to you in some way. You think there is something inherently bad about doing the task. You need to figure out what you think is bad.

For the cold call, you may think it's some form of improper begging. Or maybe you think it's an imposition to call. Or maybe you think a person in your position should not have to stoop to making cold calls. If the task violates your sense of right and wrong or your self-image, you will be repulsed at the thought of doing it. Again, ask yourself, is that true? Or is it some old baggage?

Sometimes the aversion is warranted. I often find that when I am averse to doing a marketing task, it's because I haven't figured out the proper way to do it. The way I had planned to do it was grasping and pushy; I need a different approach that isn't.

Sometimes the aversion is based on old baggage, in which case you can drop that baggage and move forward. But you can't figure out what to do until you see that it is the task itself that you are averse to.

Now let's look at the second kind of case: slogging. If you're slogging on the task, your dominant emotion is probably anger, frustration, or despair. Again, each emotion implies a different cause and therefore a different solution.

Let's consider as an example something you promised to do for someone else. You've actually worked on it a bit, but it's going nowhere. Perhaps you agreed to give feedback on an article to a friend. Or to take a real case, I wound up contributing to a gift bag for a fundraiser.

If you're angry, you're blaming someone else for your troubles. Who? What did he or she do? You need to spell out the reason for your anger in order to see what you should do about it.

For example, maybe the article is so poorly written and filled with typos that you are thinking your friend shouldn't have sent it to you in this shape. It feels like an imposition for him to request feedback because it takes 10x as long to analyze poorly written material versus well-written material. If this is the case, perhaps you should give a general suggestion and gently ask your friend for a revised version to look at.

On the other hand, maybe you're angry that the friend asked you to do it in the first place, and you keep wishing you hadn't said yes. Well, that's a red herring! The person you are really angry with is yourself. There was nothing wrong with your friend asking you; you’re the one who should have said no. At this point, you need to think about whether you're committed or not. Can you reasonably back out, or how are you going to do it if you can't?

In contrast, when you're frustrated, you are probably working in fits and starts. You do a little, make a little progress. Then you need to backtrack, or you get pulled in a different direction. Frustration often reveals some kind of confusion about how to do the task. You feel frustrated because you think you know how to do it, but despite your effort you are not getting the results you expected.

Often, you are trying to achieve a twofer. You are aiming to achieve two conflicting purposes at once. For example, I had not planned to donate to the gift bag because I was too busy, but someone put me on the list of donors. As a compromise, I decided to donate a virtual recording of an old freebie, "Jump Start Your Thinking," because it would be easy.

Then when I sat down to put together the gift, I found I was slogging away in frustration. When I examined what was going on, I realized I had two purposes: to get it off my plate as quickly as possible, and to put together an appealing package that would get customers to my site. That latter goal kicked in automatically, because it was essentially a marketing piece. Until I decided which was most important, I was thrashing between time and quality. As soon as I decided it was more important to make the coupon quickly, I had it done in 10 minutes.

Finally, if as you're slogging through you notice you're feeling hopeless, you are probably thinking that you are doomed to keep slogging. You have no choice. Somehow you've wound up doing this task on a duty premise. You feel there's nothing in it for you.

If that happens, you need to go back and ask yourself, “What do I want here?" and “What's in it for me?" When working on the gift bag, I could regain the perspective that this was a marketing opportunity. When analyzing your friend's paper, you could consider your genuine interest in the subject or your genuine desire to help your friend.

If there really is no value for you, why are you doing it? There are no unchosen obligations and no rational person would have you sacrifice your interests to him or her.

The bottom line: Emotions are alerts to threats or values at stake. But you don't know exactly which values you can gain, or which threats you need to counter, until you name the emotion and decode the exact evaluation that underlies it.

Learn about the underlying evaluations for the eight basic families of emotions by getting the Thinking Directions Starter Kit, which includes a class on "Emotions and Values 101." Get it here.