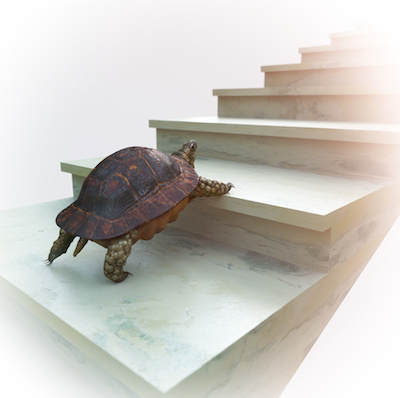 As most of you know, I’m a thinker. I like to understand issues thoroughly before I act. I am happy to consider possibilities, work out consequences, and introspect my emotional reactions before jumping into action.

However, I have learned the hard way that if I want to get critical work done, I need to be wary of this preference, and switch from thinking to acting sooner than I am comfortable. The payoff is huge.

If I’m resisting some work, taking a tiny step on it will either get me over the hump or reveal the source of my resistance in great emotional detail, so that I can figure out a more realistic next step.

If I have a long-range project that is just in my head, taking a small real-world action to move it forward clarifies the project tremendously, giving me a sense of progress that motivates the deeper thinking needed to bring it to fruition.

If I’m paralyzed by indecision or overload, a simple task such as tidying my desk will often clear my head and enable me to choose my next step.

To be clear, my wariness regarding my preference for thought is not to be interpreted as a preference for action. A bias toward action creates its own problems.

You have probably heard “it’s better to do something than nothing.” This is a rationalization for taking action before you have any idea whether it will be beneficial. Think of the last time you said something you regretted in the heat of anger. Doing nothing would have been better — at least until you could calm down and figure out something constructive to say or do.

If you want to test whether you are ready to act, give a reason for your action. Spell it out to yourself in a full sentence. If you can say your reason without laughing or cringing — it makes sense and is constructive — then by all means act on it.

Notice I don’t say, “just do it.” This is another mistaken catch phrase with a bias toward action.

If you think you should do something, by all means, do it if you can. However, if you feel resistance to doing it, that is a red flag indicating that you have not thought through some value consequences of this action.

The key is to determine a doable action you can take.

As I mentioned earlier, often taking a tiny, tiny step can reveal the source of resistance and help you resolve the issue. Sometimes it doesn’t. Sometimes identifying the resistance raises the stakes. You realize that you hate this part of your job or you have deep doubts about your direction, and you’re fed up with the status quo. When this happens, you may need significant introspection time to untangle the issues.

In the meantime, your decision regarding what to do now needs to take into account that you’ve just uncovered a conflict that will take time to resolve, and perhaps you don’t have time to deal with it right now. In these cases, you need to take a step that holds all your values with care. You need to identify a next step that you can take now which addresses any urgent needs, which also incrementally helps you to resolve the deep conflict. For example, doing the task you “should” do with your eyes-wide-open to its unpleasantness can help you get clearer on the deeper issues. (But that is by no means the “path of least resistance.” It’s quite uncomfortable, and takes significant effort to do.)

That is, of course, a perversion, since emotions are alerts to value issues that need to be considered as part of a thought process. Emotions themselves do not give you sufficient information to reach a logical conclusion — they are often distorted or superficial. You simply don’t know their real meaning until you introspect them to identify the true values at stake in the moment. That is an eminently rational activity.

So, with that clarification, we can sum up this entire article in three words: “Go by Reason.”