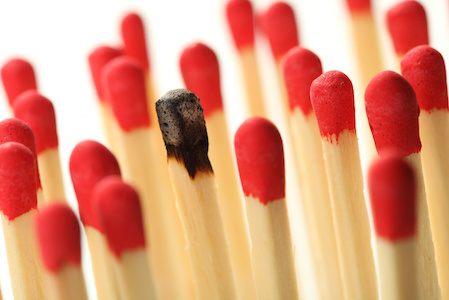 Burnout is a common problem. When you “burn out,” you lose the motivation to do productive work that you have done in the past — and used to enjoy doing.

There are three common sources of motivation: a personally meaningful (selfish) purpose, an inspiring person, or an urgent priority.

The first of these is fundamental. If you don’t have selfish purpose in your life to set a direction and prioritize your commitments, other people and urgent priorities become a drain on your energy.

However, it is not enough to have a selfish purpose. I am wildly, first-handedly passionate about understanding how you grow your own mind. That hasn’t stopped me from burning out. From time to time, I notice that I have gone on strike. I have total resistance to doing work that in principle I want to do.

Your old thinking — that rule, automatized evaluation, or expectation — may be correct. But if you are feeling conflict, there is some value at stake that is not completely clear to you.

This has led to an important practice: whenever I feel I “have to” do something, I check my premises. I recognize I am trying to force myself to act on a past prediction of what is best for me right now. What I need is my best thinking on what is in fact best for me.

The truth is that the idea that I “have to” is wrong. You always have a choice — a metaphysically given choice. You may not like the choice, but you do have it.

The conflict means that there are values that need to be brought out to the light of day and factored into the decision. Logic requires that you hold the full context — of knowledge and values — before making the decision. You need to do a little due diligence to identify what is the value at stake.

Clarifying the values can be tricky when the resistance or temptation appears to be illogical. If the immediate explanation for why you don’t want to do something is irrational, like “I don’t wanna,” you might be tempted to dismiss it. In these cases it’s important to show respect for yourself. Take the time to identify the deeper rational value that is really at stake here — don’t settle for the superficial irrationality.

For example, a client I had once needed to write a grant proposal. She said she was procrastinating, and thought she should just jump in and start writing. But when she listened to her resistance to writing, she realized that she needed data to show that the earlier project was a success. She needed to send out a survey to past participants — urgently — so that she could get data to incorporate into the proposal. This had not been on her radar, until she examined the reasons for her resistance.

Going by “have to” is wrong. Just as it’s wrong to force another person, it is wrong to force yourself. If you use your willpower to force yourself to act against strong resistance, you will miss an important source of information about your work (the resistance), associate pain and suffering with the work, and eventually start hating it. That will cause burnout, no matter what the end.

Some people have have a rationalistic view of selfishness. They think that if they know that the overall goal is good, then any step toward it is mandatory. But that is not the case. Both the end and the means need to be in your self-interest.

To be clear, I am not saying, “take the path of least resistance.” If you only take action that you “feel like” doing, you’ll never achieve your goals. The truth is, you need to exert your willpower effectively — on the small step that gives you leverage for gaining the big values over time. If you’re feeling resistance, you may be trying to take too big a step. You need to find a smaller step — maybe an uncomfortable or unpleasant step — that you are willing to take.

Another way to look at this — if you have a first-handed goal, and you are unmotivated, lack of motivation is not the problem. Unclarity is the problem.

Motivation is an effect, not a cause. If you are unmotivated to take an action you believe is in your best interest, your challenge is to get true clarity on the values at stake in this moment. That means — get clarity on your emotions.

This doesn’t have to take a lot of time. In general, if you can’t resolve a conflict in three minutes, I recommend finding a step you’re willing to take despite the conflict, one that will help you resolve the conflict.

If no, use your willpower to find the step you are willing and able to take.

To stop burning out, I needed to take seriously the idea that you cannot force a mind — not even your own. And that means forcing your action is never the answer. If you feel you need to force yourself, step back, understand the full value context, and choose a step toward your goals you can take willingly.