A New Perspective on Self-Critical Thoughts 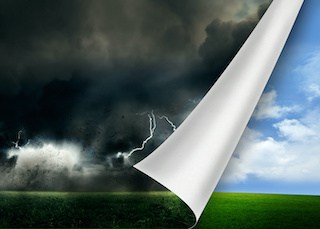 Self-critical thoughts get a bad rap. You should neither reject self-critical thoughts nor treat them as revealed truths. Instead, treat them like crazy ideas from a brainstorming session. They, too, are products of your current knowledge, values, and skill. Used constructively, they can help you achieve your most ambitious goals.

This new approach to dealing with self-critical thoughts is practical, logical, and kind.

Let’s just take a couple of generic self-critical thoughts to work this out: “I should know better” and “I shouldn’t have made that mistake.” And let’s stipulate that you do know better and that it was a mistake.

For example, I recently ran into these two thoughts trying to draft a chapter on emotions. I spent an unproductive hour, after which I thought, “I should be able to write this chapter” and “I shouldn’t be developing new material. I should be writing only about things I already have solidly worked out.”

I agree with all of these thoughts. They are true. By paying attention to them and handling them constructively, I prevented them from sabotaging my writing.

Self-critical thoughts trigger emotions of frustration and guilt. These in turn motivate aversion to the task you are being self-critical about. This negativity puts you in a mental state that naturally calls your attention to what’s going wrong, not what’s going right. Pretty soon you are in a negative spiral.

This negative spiral gives plausibility to the school that believes you should reject self-critical thoughts. “Don’t ‘should’ on yourself!” they say.

The idea of replacing negative self-talk with positive self-talk is good as far as it goes. However, affirmations only work if they are true. Only an affirmation you believe will help you break out of a vicious cycle of self-criticism.

Unfortunately, many advocates of affirmations give the impression that it’s fine to manipulate yourself into believing the positive idea through repetition and wishful thinking. They ignore the need to logically validate the affirmation.

I think this is because they treat self-criticism as the problem. The only “problem” with self-criticism is that it often has a grain of truth in it, and sometimes it has a lot more than just one grain. That is what triggers the guilt and frustration. That is what makes it so painful. You are seeing yourself as the obstacle to achieving your own goals.

The advocates of blind affirmations have no way to address the objection, “But it’s true.” All they can say is to blank out the negatives and focus on the positives. Shall I spell out why that is a disaster in the making?

If the criticism is true, you are blanking out facts that need to be understood in order to achieve your goal. If the criticism is false, avoiding it creates a psychological mess. To quote Ayn Rand, “To fear to face an issue is to believe that the worst is true.”

But it is at least as serious a problem to treat self-criticism as “just true.” Some people conclude, “That’s just the way I am.” They have a “fixed” mindset and resign themselves to not being capable. If I had a fixed mindset, I would have concluded long ago that “I can’t write” and I never would have learned how.

But even if you have the opposite, a “growth” mindset, you can go wrong if you conclude you are broken and need to fix yourself to achieve your goals. This is the error I fell into. For many years, I believed that I wouldn’t be able to write until I “fixed” my subjectivity and imprecision.

This is a counterproductive way to take criticism — any criticism. Self-criticism, your parents’ criticism, anonymous criticism. Thinking you need to “fix” your psychology makes your goals seem like far-off dreams that can only be achieved after you “solve” an amorphous problem, which, likely as not, no one knows how to solve exactly.

This kind of thinking leads to creating tests for yourself and burnout.  You decide, “If I can do this, that will prove that I’m fixed.” In the short term, you may achieve a lot of goals. In the long term, you won’t feel the satisfaction you deserve from achieving them, because no success will make self-criticism go away. There will always be a new test. Eventually, you burn out.

There is a third alternative, which I have recently turned into a tactic. Turn your attention to the strengths implied by the criticism.

For example, a little later working on the same chapter on emotions, I had another self-critical thought, “Uh oh. This is not interesting. I’ve never been able to write this chapter on emotions in a way that is not boring.” These statements were all true. I had drafted chapters on emotions two or three times, and all previous versions were overly theoretical and utterly boring. So, this happens to be a big ole fear of mine.

By using the criticism as a spur to reveal my strengths, I realized:

a) My values: Making the chapter interesting is a high value. I will not rest until I succeed.

b) My knowledge: I know a lot about this topic, I have a unique perspective on it, and all of the details are fascinating to me.

c) My skill: I have gotten pretty good at judging whether a particular reader will be interested in a particular piece of writing.

By accepting the criticism that the chapter would be boring, and using that to examine my strengths, I came up with a great next step: I wrote out four pages of notes on what I think is interesting about the topic. I then went through those notes to figure out how to interest my target reader.

Problem solved, quickly, by translating self-criticism into self-awareness of strengths.

Share this page
← The Need for Certainty What is Missing from Your Plan for the Day? →